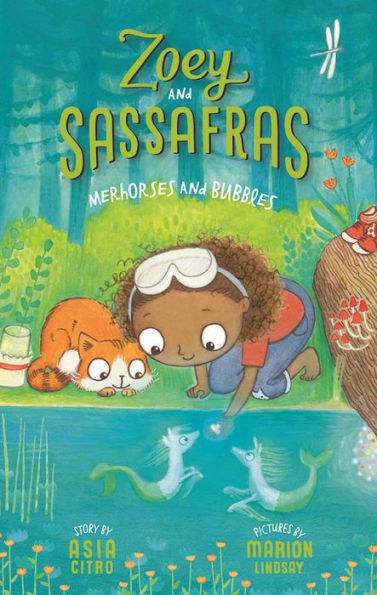 Zoey and Sassafras go to a stream to look for bugs, but they discover that there are no bugs! Things get even more urgent when they learn that the magical creatures living in the stream are in danger because the bugs that the merhorses eat to survive have all disappeared. Zoey and her mom must solve the mystery of the stream. Can Sassafras, Zoey, and her mom find where all the bugs went? Will they be able to save the merhorses?

In Merhorses and Bubbles, Zoey uses everyday objects to create an underwater viewer. When Zoey goes to the stream, she teaches her cat, Sassafras, about her favorite stream bugs. Sassafras loves bugs and loves to chase and eat them. However, when Zoey and Sassafras can’t find any bugs, her mom helps test the water and they discover that the water is polluted. The remainder of the story focuses on investigating how the stream is being polluted and finding a way to fix the problem.

Readers will relate to the adventurous Zoey and her desire to help the merhorses. Zoey uses her “thinking goggles” and data to conclude that the stream is polluted. She relies on her parents’ help and eventually meets the magical frog named Pip. Zoey’s father cannot see the magical creatures and this creates some humorous situations that will have readers giggling. With the help of her parents, a magical frog, and Sassafras, Zoey is able to use the scientific method to save the stream.

Even though the merhorses do not play a major role in the story, readers will still enjoy the mystery of the polluted stream. Throughout the story, many lessons are taught about the environment, including how pollution affects pond creatures, how pollution gets into streams, and how something like soap can be harmful. Zoey and her parents finally discover that the pollution is caused by a group of teens who are raising money by having a car wash. Instead of taking over, Zoey’s parents allow Zoey to educate the teens, and then her parents help the teens come up with an alternative fundraiser.

Zoey’s adventure is shown through large black and white illustrations that appear on almost every page. When Zoey writes in her science journal, the font changes to large, kid-like font. While Sassafras plays a tiny role in the story, the cat appears in many of the pictures. Readers who are not fluent will need help with some of the vocabulary. However, with short paragraphs, plenty of dialogue, and a simple plot, Merhorses and Bubbles is accessible to most readers. Even though Zoey and Sassafras is a series, the books do not need to be read in order.

Zoey is a strong girl who uses science to solve problems. Through her experiences, readers will be encouraged to positively change their world for the better. Even though Zoey is a child, she still finds a way to help keep pollution out of streams. Zoey’s parents are portrayed in a positive manner and they exhibit healthy communication skills. Merhorses and Bubbles teaches valuable lessons about nature by using a fun story and a relatable character. The end of the book has a glossary that explains unfamiliar terms.