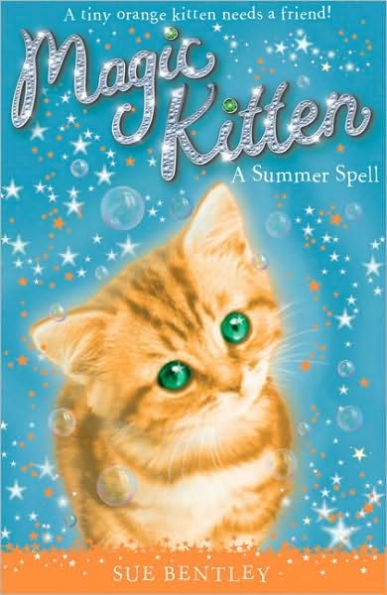 Lisa didn’t want to spend the summer in the country with her aunt. With no friends and no TV, Lisa thinks she will be lonely and bored. When Lisa finds an orange kitten in her aunt’s barn, she’s surprised when the kitten talks to her! The kitten, named Flame, is really a lion prince in disguise. Prince Flame is hiding from his uncle, who wants to kill him. Lisa promises to help Prince Flame stay safe.

But Prince Flame isn’t Lisa’s only friend. While riding her bike, Lisa meets John, a boy about her age. Someone has accused John’s father of poaching. Late one night, Lisa and John sneak out in the middle of the night to try to find the real poachers and get evidence that proves John’s father is innocent. With Prince Flame’s magical help, Lisa is able to help John.

A Summer Spell has several fun scenes that will make readers wish they had their own magical cat. Prince Flame not only helps Lisa with the dishes, but he also makes her invisible. Even though the story revolves around Prince Flame’s magic, the story has some darker events. Not only are bad men poaching, but the men frame John’s father, who is put in jail. The story hints that John’s father is targeted because he is a gypsy. Not only that, but Lisa sneaks out of the house in the middle of the night to go find the poachers, even though she knows that they have guns. Without Prince Flame’s help, Lisa and John would most likely be dead.

Lisa is a relatable character who wants to help her friends. However, at first she is disrespectful to her aunt. And even after she promises not to go anywhere without permission, she sneaks away several times. Despite this, readers will enjoy the plot’s action and Flame’s magic. Black and white drawings appear every three to seven pages. Even though A Summer Spell has some negative aspects, the story will engage readers and have them reaching for the next book in the series, Classroom Chaos. Cat lovers should also put the Purrmaids Series by Sudipta Bardhan-Quallen on their must-read list.