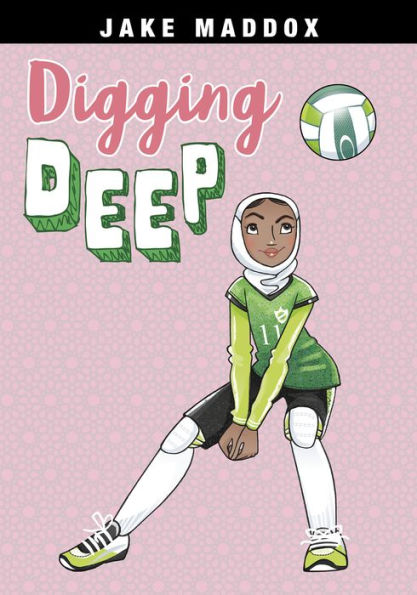 Asiyah Najjar isn’t sure she wants to play on a travel team. But her best friend Lucy talks her into going to volleyball tryouts. When both Asiyah and Lucy are chosen to be part of the team, Asiyah is excited. But the practices are longer, harder, and more frequent than her old squad’s. Soon, Asiyah isn’t sure that she made the right decision in joining the travel team.

Asiyah is well-known for goofing around and making her friends laugh. While at practice, she keeps up her silly antics but instead of laughing, Asiyah’s new teammates are upset that she’s distracting them. Instead of having fun, Asiyah keeps making mistakes. Instead of upper her game, Asiyah is having difficulty concentration. When she overhears Lucy and her other teammates talking poorly about her, Asiyah wants to quite the team. Will travel volleyball come between Asiyah’s and Lucy’s friendship? Can Asiyah dig deep and jump to the next level of play?

Before quitting, Asiyah asks her brother for advice and with his encouragement, Asiyah begins to ask herself, “Is now the right time for fun?” As Asiyah gets more serious and focused on the game, she realizes that working hard improves her skills. Soon, both her coach and teammates notice Asiyah’s efforts. When Asiyah makes a key play that leads to winning a game, Asiyah knows her hard work has paid off. Asiyah realizes that she doesn’t need to change, she just needed to figure out when to be serious and when to be silly.

Readers will relate to Asiyah, who loves to make people laugh. Her silly faces, dance moves, and jokes are fun, but they also lead to trouble. Like many, Asiyah’s feelings are hurt when her best friend doesn’t stand up for her. Asiyah begins avoiding Lucy, which just makes the problem worse. When Asiyah talks to her brother, he gives her advice—about both volleyball and friendship. Her brother tells her, “Well, you need to decide if you want to put in the effort to get better…If you don’t, then maybe the travel team isn’t right for you. And that’s okay.”

Asiyah is Muslim and wears a hijab. When she tries out for the travel team, she is nervous about having to explain why she wears a hijab. This brief scene is the only time Asiyah’s religion is mentioned. While the story has diverse characters, the characters are one-dimensional and generic.

While the story has some play-by-play sports action, readers of all types will relate to Asiyah’s insecurities, realistic conflicts, and silly antics. Told from Asiyah’s point of view, Digging Deep allows the reader to understand Asiyah’s conflict. Digging Deep has ten short chapters, easy vocabulary, and a simple plot. The cute black and white illustrations that appear every 4 to 7 pages help keep readers engaged. For those who would like to use Digging Deep as a learning opportunity, the end of the book has a word glossary, discussion questions, writing prompts, and a glossary of volleyball terms. Digging Deep will entertain readers and teach them the value of hard work.