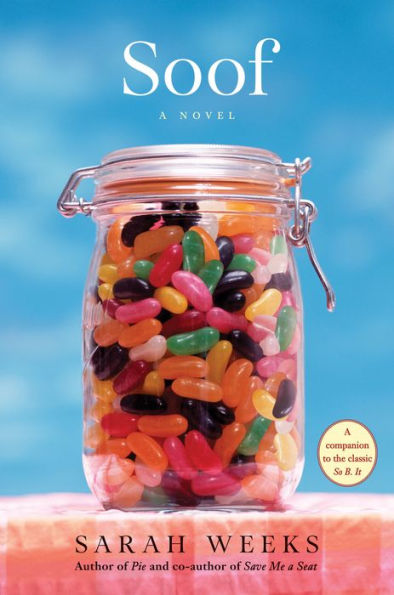 “I wonder sometimes if the stuff that happens to us—good or bad—was going to happen to us anyways, and the reason we call it luck or destiny or fate or karma is so it won’t feel quite so random,” Aurora. —Soof

Companion to So B. It

Aurora knows all the Heidi stories. All of her life, Aurora has heard about Heidi and how Heidi brought her family luck. But sometimes Aurora thinks her mother doesn’t feel so lucky to have her as a daughter. Her mom thinks she’s weird and wants her to have friends. Aurora has her dog, Duck, as a best friend, and Duck’s friendship is enough.

When Aurora’s mom announces that Heidi is coming for a visit, everything changes. Her mom is obsessed with making everything perfect for Heidi’s visit. Right before Heidi’s visit, bad luck hits the family. When a fire damages their house, Duck disappears, and Aurora and her mother begin fighting like alley cats.

Aurora knows her mother believes in Soof, which means love. But she’s left wondering if her mother loves Heidi more than her.

Although Soof is the companion novel to So B. It, Soof can be read as a stand-alone novel. However, reading So B. It will help readers understand the relationship between Aurora’s mother and Heidi. Soof, which is told from Aurora’s point of view, focuses on Aurora’s struggle to feel loved. Aurora doesn’t mind being labeled as “weird” and not having friends; however, her mother has taken her to several doctors to see if she is “on the spectrum.” Aurora sometimes wonders if her mother was hoping to have a daughter like Heidi, not a weird daughter like herself.

Aurora is a complex character who understands herself, yet still feels insecure. The interactions between Aurora and her family drive the story. Her imperfect family is portrayed in a positive light. Even though Aurora’s family loves each other, the reader can understand why Aurora feels threatened by Heidi’s visit.

So much of the story focuses on Aurora’s internal conflict that the story lacks action. Although Aurora and her parents are interesting characters, the complicated family issues that drive the story may be difficult for younger readers to understand. For readers who are interested in family dynamics, Soof would be a good choice. So much time is spent building suspense around Heidi’s visit that the short interaction between Heidi and Aurora is a disappointment.

Soof teaches the importance of communication as well as accepting yourself, even if others think you are weird. The satisfying conclusion of the story will leave readers with a smile and a feeling of hope. The easy vocabulary and short sentences make Soof an easy read; however, the story will be best suited for readers who are ready to delve into the interpersonal relationships of families.

“I wonder sometimes if the stuff that happens to us—good or bad—was going to happen to us anyways, and the reason we call it luck or destiny or fate or karma is so it won’t feel quite so random,” Aurora. —Soof