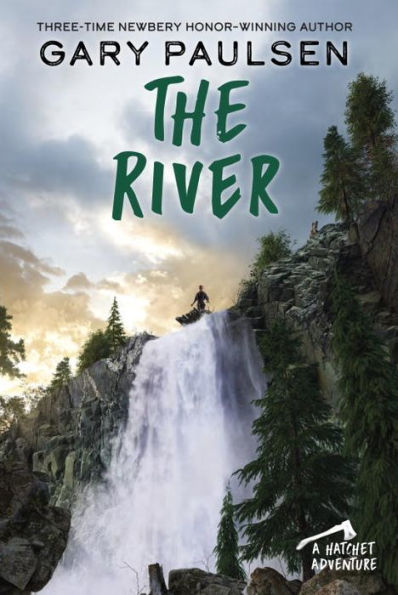 Two years after Brian Robeson survived fifty-four days alone in the Canadian wilderness, the government wants him to head back so they can learn what he did to stay alive. This time Derek Holtzer, a government psychologist, will accompany him. But a freak accident leaves Derek unconscious. Brian’s only hope is to transport Derek a hundred miles down the river to a trading post. He’s survived with only a hatchet before—now can Brian build a raft and navigate an unknown river? For the first time, it’s not only Brian’s survival that’s at stake.

As Brian embarks on his journey, he realizes that being in the wilderness with another person isn’t the same as crash landing. There is no danger. No tension. And then Derek is injured, and Brian must make a life or death decision. However, the situation still has little suspense or action. Even when Brian is rafting down the river, there is little excitement, and Brian’s hallucinations are confusing. However, when Brian becomes exhausted, he thinks, “It would be better if Derek were gone. What were the differences? He was dumb enough to rise up and get hit by the lightning, and he should be gone.” Brian doesn’t give in to this momentary weakness and ends up saving Derek.

Even though The River follows Brian on another adventure, Brian’s character does not grow. Much of the plot focuses on Brian’s thoughts and emotions, which slows down the pace. The conclusion is abrupt and the secret that plagued him in Hatchet is never resolved; however, it no longer bothers Brian. The River has few intense moments and the plot and characters are underdeveloped, which makes it hard for readers to connect with the characters.

Readers who enjoyed Hatchet will find Brian’s journey interesting. However, if the slow pace of Hatchet made finishing the story difficult, you will want to avoid picking up The River. Brian’s next adventure, Brian’s Winter, takes the reader back in time and shows what would have happened if Brian wasn’t rescued after his plane crash. Readers who enjoy understanding character’s thoughts and emotions will find The River satisfying. However, if you’re looking for a more fast-paced survival story, Adrift by Paul Griffin would be a better choice.