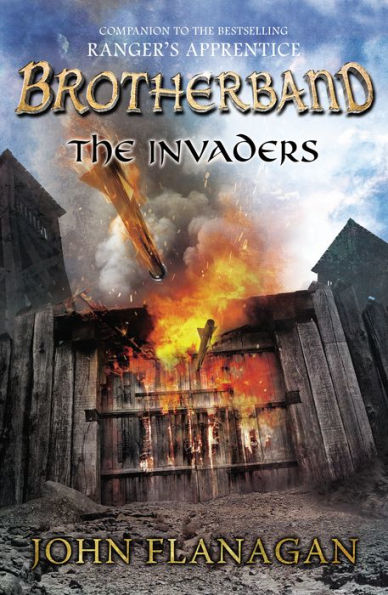 As champions of the Brotherband competition, Hal and the rest of the Herons were given a simple assignment: safeguard the Skandians’ most sacred artifact, the Andomal. When the Andomal is stolen, the Herons must track down the thief to recover the precious relic. But that means traveling stormy seas, surviving a bitter winter, and battling a group of deadly bandits willing to protect their prize at all cost. If it comes down to a fight, Brotherband training might not be enough to ensure the recovery of the Andomal—or the safety of the Herons.

Even though the Herons have left Skandia, their training continues as they wait for the winter winds to cease. The beginning of The Invaders focuses on Thorn’s training of the boys, which allows Thorn’s character to shift from a broken-down drunk to a respected warrior. The story often shifts focus from the Herons, to the pirate Zavac and back to Skandia. While the three story threads are easy to follow, the large cast of characters do not allow for sufficient character development. Hal and Thorn are well-developed, but the other characters fade into the background.

Despite the lack of character development, one theme runs true: “We all have different levels of ability. What we must do is make the most of what we’ve got.” Each character has a different ability and even Ingvar, who has poor vision, is a valuable member of the crew. The Invaders adds Lydia to the crew. Lydia is not a helpless girl who needs a man to save her. Instead, her skills are essential in helping save lives during the battle against the pirates.

While the plot is somewhat predictable, the interactions between the Herons’ Brotherband, Swengal’s Skandian crew, and the town people add interest. Unfortunately, at 400+ pages, The Invaders does little to advance the plot. The story ends with the pirate Zavac’s escape and the Herons alone in their search to find Zavac and take back the Andomal. The sluggish beginning, the difficult vocabulary, and the descriptive sailing scenes make The Invaders best for strong readers.

Unlike the Ranger’s Apprentice Series, the main characters are not fighting to help their country. Instead, Hal is fighting to restore his Brotherbands’ reputation. Another main difference between the two series is that Hal’s ingenuity is constantly praised, and he does not learn and grow. Readers who fell in love with Will in the ranger’s apprentice, will miss the three main characters—Will, Horace, and Halt. Even though The Invaders is not as captivating as the Ranger’s Apprentice Series, readers ready for an adventure on the high seas will enjoy the story.