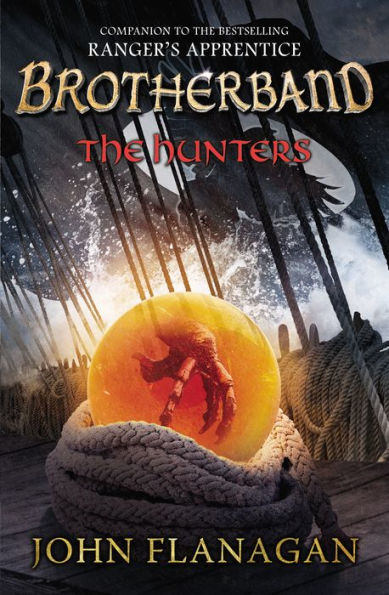 Hal and his fellow Herons have tracked Zavac across the ocean, intent on retrieving the stolen Andomal, Skandia’s most prized treasure. Even though a fierce battle left Zavac and his fellow pirates counting their dead, the rogue captain managed to escape right through the Skandians’ fingers. If they hope to bring Zavac to justice and reclaim the Andomal, the Herons must take to the sea. But the challenge ahead is a dangerous one that could very well take out Hal’s entire crew.

In the first installment of the Brotherband Series, it was difficult to keep track of all of the characters. However, the main characters are now well-rounded individuals and their unique traits are beginning to shine. Hal has grown into a confident skirl, who knows his crew, which allows him to assign each person a job that is best suited to his/her talent. Even though Lydia is a girl, during battles she contributes because her skills are extremely useful. Readers will enjoy the interplay between the Herons and laugh at some of their mischievous ways.

While the second installment of the series, The Invaders, was slow and uneventful until the end, The Hunters has the perfect blend of suspense, character development, and battles. The Herons work as a team and show the importance of hard work, friendship, and loyalty. One of the best aspects of the series is that everyone has a valuable skill and that skill does not have to revolve around fighting. For example, Edvin cooks, knits, and steers the Heron. Even though the crew teases Edvin about his knitting, in the end, even Edvin’s knitting is used to benefit the entire crew.

The Brotherband Series brings to life the sea-faring warriors of Skandia, while teaching important lessons about working as a team and valuing others. The Hunters quickly captures the readers’ attention and keeps readers hooked by introducing interesting characters and conflicts. Even though all of Flanagan’s books end in an epic battle, each battle is realistic, unique, suspenseful, and told without gory details. The book’s conclusion is both heartwarming and humorous. After finishing The Hunters, readers will be eager to pick up the next book in the series, The Slaves of Socorro.