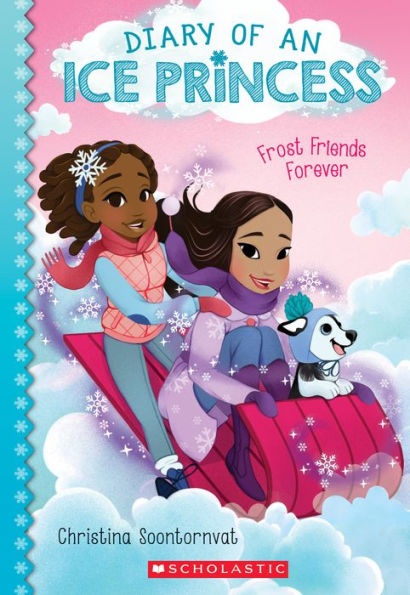 Lina has never had a sleepover before. She’s excited that Claudia is coming up to the clouds for the first time. Lina always has fun at Claudia’s sleepovers, and Lina wants her sleepover to be extra special and fun. Lina has everything planned—snow cones, pizza, and staying up late.

When Lina’s Great-Aunt Eastia visits, everything that Lina has planned must be changed. Instead of pizza for dinner, they’re eating turnip soup. There also won’t be snow cones, snow fun, or staying up late. Instead, Great-Aunt Eastia wants Lina to act like a proper princess. Lina doesn’t want Great-Aunt Eastia to ruin her fun. How will Lina and Claudia have a snowingly perfect sleepover without following Lina’s plan?

Readers don’t have to be princesses to understand Lina’s conflict—Lina just wants to have a good time with her best friend. Even though Lina really loves her great-aunt, Lina doesn’t want to follow her advice. The magical princess has been banned from creating snow. In an attempt to have some snow fun, Lina and Claudia sneak onto Lina’s father’s airplane. Once the plane has landed, the girls head to a snow hill for some amazing sledding. When an unexpected blizzard arrives, the girls discover that they are lost.

Like a Disney princess, Lina is sweet, but not perfect. Lina tells her own story in a diary format, which allows readers to understand Lina’s conflicting emotions. In the end, Lina learns that she didn’t need exciting plans to have a fun sleepover with her best friend. Even though Lina doesn’t follow instructions, she still shows her great-aunt respect. Lina knows she can’t talk back to her aunt “because it would be rude.” Readers will understand Lina’s frustration and her mischievous side, but also see the dangers of sneaking away from her home.

Adorable blue-and-black illustrations appear on almost every page, showing Lina’s adventures. Some of the illustrations look like a piece of blue binder paper and have a list that helps reinforce the story’s ideas. For example, after Lina realizes that she and Claudia are lost in the snow, she makes a list of “Why I felt, really, really awful.” Readers will enjoy seeing Lina and Claudia’s fun sleepover, Lina’s house in the clouds, and her cute husky puppy.

Frost Friends Forever is not only a magical princess story, but also introduces the science of friction through an easy-to-understand explanation. The story also gives a practical example—Lina and her friend use ice friction to turn the ballroom floor into a sledding rink. The end of the book also explains how to make an ice lantern like the one Lina and Claudia made.

Readers will want to read about Lina’s adventures again and again as they learn important lessons about friendship and appreciating people’s differences. Readers do not have to be princesses to apply the story’s message to their life—being a princess is acting honorably as well as thinking about others, and keeping promises.