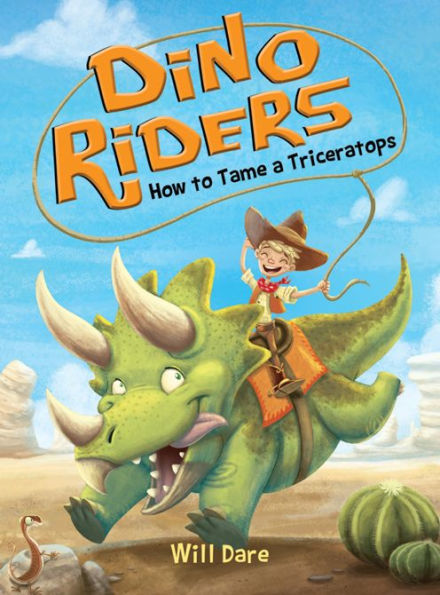 Josh dreams of being just like Terrordactyl Bill, the great dino rider who protects the Lost Plains from fearsome dinosaurs and criminals. Josh’s life isn’t as exciting as his dreams. Instead of bucking brontosauruses, Josh works on his family’s iguanodon ranch. His dino Plodder is a tired dinosaur who moves too slowly.

When Josh hears that Terrordactyl Bill is going to present the award at the annual settlement race, Josh is determined to win the race and meet his hero. Then a sneaky man tricks Josh into trading for an untamed triceratops. Is there any way Josh can tame the triceratops and win the race?

The first installment of the Dino Riders series brings a world with dinosaurs to life with just the right amount of imagery for younger readers. The black and white illustrations help the reader visualize the characters and the action of the story. Josh’s doodles also add to the interest of the story. The action-packed story is fast-paced and downright fun to read.

Readers will be able to relate to Josh’s inability to concentrate in school, his desire to prove his worth as a dino rider, and his conflict with his parents. Although the bully is a bit stereotypical and the conclusion is predictable, that doesn’t take away from the book’s enjoyment. The story does contain body humor, which some parents may not like. Many of the story’s aspects are farfetched, such as when people ride dinosaurs to town to do their shopping and when a dinosaur kicks Josh in the stomach, but he is uninjured. Anyone who enjoys adventure and dinosaurs will find How to Tame a Triceratops fun to read.