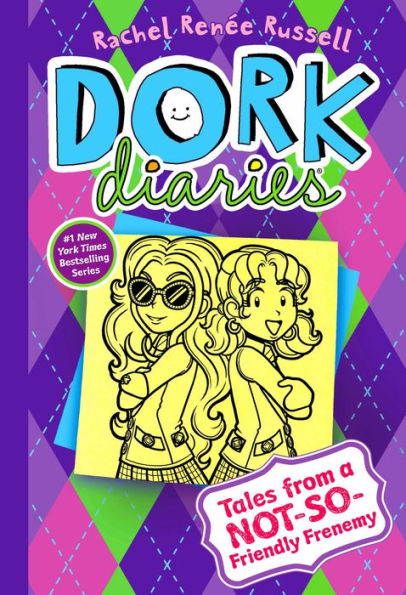 Nikki thinks this school year will be better because her arch nemesis MacKenzie Hollister now attends North Hampton Hills (NHH). But Nikki’s luck is about to run out. As part of a student exchange week, Nikki will spend a week at NHH. How will she survive a week at the same school as her enemy?

Tales from a Not-So-Friendly Frenemy’s conflict revolves around all the drama in Nikki’s life. At one point in the story, Nikki makes a homemade facial cream hoping the cream will give her flawless skin. Instead, the cream turns her face neon blue. The story contains many such silly scenes, which may make readers giggle.

Readers will enjoy the format of the story, which uses lists, quote boxes, emoji’s and text talk such as “BFF and R U kidding me?” Cute black-and-white illustrations show Nikki and the others in stylish clothes. Since the story is written in diary format, most paragraphs consist of one to two sentences and much of the text is stereotypical preteen talk.

Because the story is written in diary format, Nikki’s thoughts are recorded. However, her thoughts are often mean, such as when she thinks, “Listen, Tiffany! I have to go to the bathroom! So while I’m there would you like me to pee and poop for you too?”

Another negative aspect of the story is the way teachers are portrayed. When Nikki first gets to NHH, a student goes through the list of teachers and explains their negative attributes. For example, the student says, “Mr. Schmidt is a senile old dude who loves ranting about when he attended NHH as a kid during the stone age.”

The students are NHH are portrayed in a stereotypical way. The beautiful, fashionable girls are mean and cruel to the boys in the science club. Most of the main characters look similar, and there is little diversity among the students. The stereotypical characters might give younger readers the wrong idea about what junior high is actually like.

Overall, Tales from a Not-So-Friendly Frenemy is an easy-to-read story that could lead to a good discussion about how people should act. The story is humorous, but the characters have many qualities that parents will not want their children to emulate. Although this fun story will entertain readers, it misses the opportunity to teach valuable lessons.