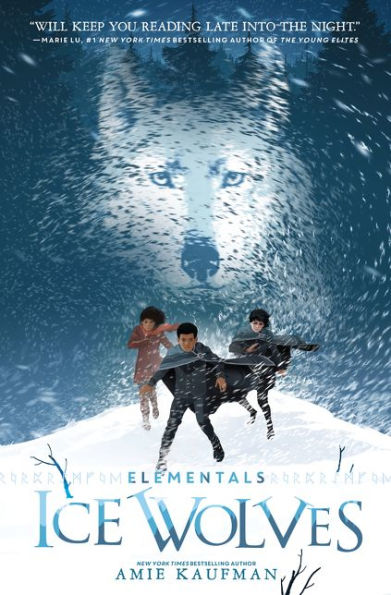 Twelve-year-old orphans Anders and Rayna don’t know who their parents are, and they have always relied on each other to get through each day. The pair know all of the back streets of Vallen and they know to avoid the Wolf Guard as much as possible. When Anders is almost caught stealing, the twins join a group of twelve-year-olds who are in line to discover if they are elementals—humans that can transform into wolves.

When Anders takes the form of a wolf and his sister Rayna takes the form of a dragon, Anders wonders if they are related at all. Everyone knows that a wolf and a dragon cannot come from the same family. Even worse, after Rayna transforms two dragons appear and claim her as one of them. The only thing that Anders knows for certain is that Ice Wolves and Scorch Dragons are enemies. But despite the feud between the wolves and dragons, Anders is determined to find his sister.

To rescue Rayna, Anders must find the dragon’s hidden capital city. The only way to get the information he needs is to enlist at the foreboding Ulfar Academy, a school for young wolves. Anders only wants to find the dragons and save his sister; he wasn’t expecting to find friends. Will Anders have to betray his new friends in order to save his sister? And what will Anders do if he finds his sister only to discover that Rayna has become just like the cruel dragons that took her?

Ice Wolves begins with a heart-stopping surprise and plenty of action, but the story starts to drag when the main character enters Ulfar Academy to learn about Ice Wolves. Because Anders doesn’t understand the elementals or the Ice Wolves, the reader gets to learn along with him. However, when the story ends there are still many unanswered questions that will nag readers.

Anders is not a unique character, but middle school readers may relate to his insecurities and his desire to find a place to fit in. As the story progresses, Ander not only builds confidence in his abilities, he also begins to understand what it means to have friends “who’d back you up without needing to know the reason why.” Even though Anders clearly cares for his pack, he never loses sight of his ultimate goal to find his sister.

Amie Kaufman has created a world with multicultural, diverse people who live in peace—people who fear the Scorch Dragons, but the reason for this fear is never explained. Although the threat of dragons brings suspense, the dragons only appear at the very beginning and end of the book. Kaufman includes many diverse characters in the story, however, at times it felt as if she was trying too hard to incorporate every type of person. One character is referred to using the pronoun “they.” The use of the pronoun is never explained, which may cause readers some confusion. One positive aspect of the story is Lisbeth, a strong female who isn’t content with following orders. Lisbeth spends much of her time engrossed in books, and it is through her that Anders begins to understand friendship. Lisbeth is curious, loyal, and determined to do the right thing no matter what.

Fans of fantasy will enjoy Ice Wolves even though the plot is not fast-paced. Even though the characters are not unique, the story of friendship and family will entertain strong readers. The conclusion contains a surprise, a battle, and a cliffhanger that sets up the second book in the series—Scorch Dragons. Readers will love how Anders learns that bravery is “doing what you must” even when you are afraid. Readers interested in Ice Wolves will also want to read the Simon Thorn series, which also has shape-shifting characters, but has much more action.