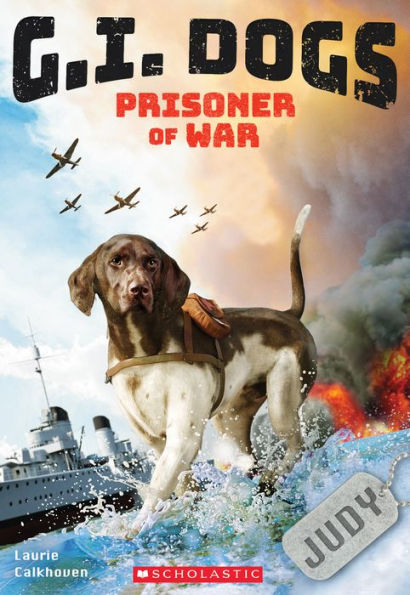 Judy, an English pointer, is dedicated to helping humans on her ship. She has an uncanny ability to tell when danger is near. Her ability to warn the men of trouble makes her the perfect dog to be a part of His Majesty’s Royal Navy. She serves along with her human companions during World War II.

When the enemy sinks Judy’s ship, she and her fellow soldiers become prisoners of war. The conditions are harsh. The men lack food, so Judy hunts rats and lizards to share with the humans. Often the men’s morale is low, so Judy does what she can to lift their spirits. As the Japanese begin to lose the war, the POWs are given less food and more beatings. Can Judy figure out a way to keep her human companions and herself alive?

Told from Judy’s point of view, Prisoner of War gives a unique perspective of World War II. The story is based on a true story and covers the time period between 1936 through 1946. Because the story takes place over a long period, readers may have a difficult time keeping track of all of the events and the different humans that Judy meets. Although Judy’s point of view is interesting, the story often reads like a history book.

Judy eventually finds a human best friend, Frank, and is completely dedicated to him. However, readers will not get a clear picture of Frank’s personality. Although it is clear that Frank goes out of his way to make sure that Judy is able to stay with him, the story doesn’t portray the deep feelings that the two have for each other.

Prisoner of War takes the events of World War II and makes them more kid-friendly; however, the events of World War II may upset younger readers. Even though the war’s brutality isn’t described in detail, people are mistreated and people die. Through Judy’s eyes, readers will see that the war was full of destruction, but there was kindness as well.

Anyone who enjoys history should read Prisoner of War because the story is based on a true story. Historical information and pictures of Judy appear at the end of the book. Even though the story is not fast-paced, Judy’s story is interesting and will ignite readers’ interest in learning more about the events that happened during World War II. If you prefer action-packed stories, Survival Tails: World War II by Katrina Charman would be a good choice; similar to Prisoner of War, Survival Tails: World War II is a World War II story that is told from an animal’s point of view.