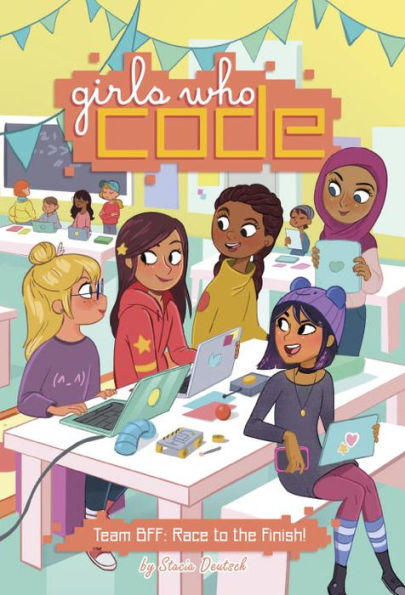 Sophia and her friends are BFFs. Together they work on coding projects, eat cookies, and have impromptu dance parties. They are excited to participate in their first robot hackathon, where they hope to show off their coding skills. But when Sophia’s parents need her to babysit instead of attending the hackathon, everything may change. Without Sophia, the team will be disqualified. When Sofia tells her friends, will they have her back or will it destroy their friendship?

The second installment of the Girls Who Code Series focuses on Sophia’s struggle with balancing home responsibilities with her coding club responsibilities. Readers will be able to relate to Sophia’s struggle to tell her friends bad news—she won’t be able to participate in the hackathon. The friends in the story not only brainstorm how to build a robot, they also show the importance of helping each other. The diverse cast of characters are young girls who have a variety of interests (cooking, drama, and fashion), but come together because of their love of coding.

Team BFF, Race to the Finish is told from Sophia’s point of view, which allows the reader to understand Sophia’s feelings of not being noticed by her family. The reader will get a small glimpse into the life of a large, Hispanic family. Sophia’s family not only makes traditional Spanish food but also uses Spanish in their everyday interactions.

Sophia is also struggling to understand her feelings for a boy. She has a crush, but is tongue-tied every time she sees the boy. As Sophia and the boy interact, she wonders how to navigate a boy-girl relationship. Team BFF, Race to the Finish is an easy-to-read story that shows smart girls in everyday situations. Sophia’s struggle is an interesting story that is highly relatable and will capture many readers’ interest.