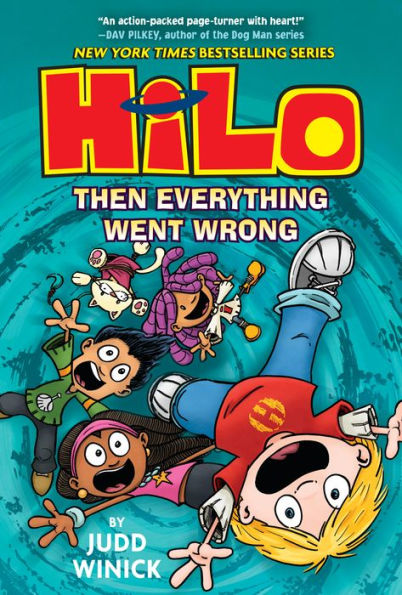 Hilo can’t remember his past, so he decides to go back to his home planet. But D.J. won’t let Hilo return to his home alone and jumps through the portal before anyone can stop him. In order to hide their disappearance, Izzy makes a fake Hilo and a fake D.J. robot. The two friends need time to explore Hilo’s home planet. Will D.J.’s parents figure out that D.J. is missing?

Hilo knows he is supposed to save everyone, but what happens if danger appears when he is gone. As Hilo discovers his past, the military is quickly narrowing their search for him. Will Hilo discover the answers he needs before it’s too late?

With Hilo and D.J. on another planet, Izzy and Gina are forced to take drastic measures to hide their missing friends. Gina creates a fake Hilo and a fake D.J., but it’s impossible for her to make them act “normal.” Even though Izzy and the robots are supposed to blend in, they keep getting into fights at school. Polly appears on earth, which adds to the comical conflict. Despite the fights and the misunderstanding, it is clear that the friends will do anything to keep each other safe.

Then Everything Went Wrong is full of humor and heart. Izzy and Polly clearly don’t understand earth’s customs, and their well-intentioned mistakes will keep readers giggling. Izzy keeps telling everyone that she “knows how all of the pieces fit,” but does she know what’s best for everyone?

The story hits on themes of friendship, fitting in, and the dangers of war. The book ends with a shocking cliff-hanger that will leave readers in suspense. Even though Then Everything Went Wrong is the fifth installment of the series, the plot continues to build and keep readers engaged. Hilo is a boy robot that readers will love.