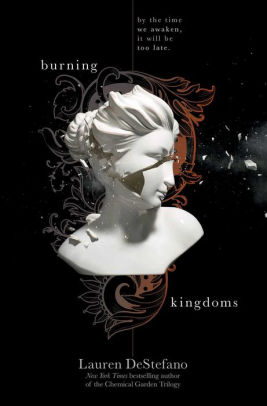 They escaped Internment, but will the ground be a refuge or a prison? When Morgan and her friends left Internment, they never imaged what life would be like on the ground. There are many new wonders, but there are also the horrors of war.

Celeste is determined to return to Internment so she can save her dying mother—and she needs the king’s help to get her home. Morgan has the ability to help Celeste convince the king to help. However, in order to help Celeste, she must betray her best friend, Pen. As Morgan struggles to make the right decision for her friends and for Internment, the war on the ground intensifies.

Soon the characters are caught in a trap of the king’s making, and they aren’t sure what will become of them. Burning Kingdoms, the second book of The Internment Chronicles, has danger, suspense, and a new set of characters.

Burning Kingdoms focuses more on the character’s relationships with each other than on the challenges of being in a new world. The story is interesting, but the world on the ground is not really unique or intriguing. The ending of the story throws in some complications—Pen’s relationship with her father and Morgan kissing Judas—however, the complications distract from the story and leave the reader wondering why they were added.