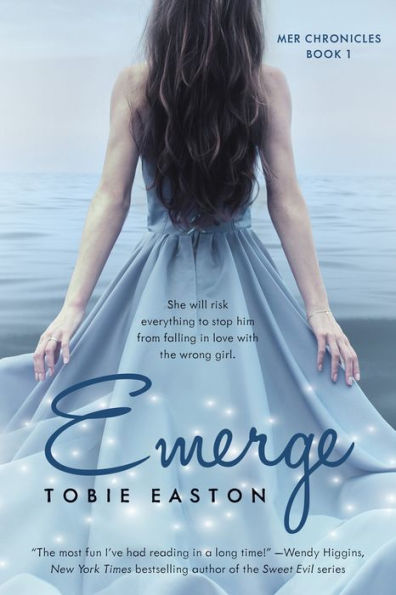 Lia Nautilus may be a Mermaid but she’s never lived in the ocean. War has ravaged the seven seas ever since the infamous Little Mermaid unleashed a curse that stripped the Mer of their immortality. Lia has grown up in a secret community of land-dwelling Mer hidden among Malibu’s seaside mansions. Her biggest problems are surviving P.E. and keeping her feelings for Clay Ericson in check. Sure, he’s gorgeous in that cocky leather jacket sort of way and he makes her feel like there’s a school of fish swimming in her stomach, but getting involved with a human could put Lia’s entire community at risk.

So it’s for the best that he’s dating that new girl, right? That is until Lia finds out she isn’t the only one at school keeping a potentially deadly secret. And this new girl? Her eyes are dead set on Clay, who doesn’t realize the danger he’s in. If Lia hopes to save him, she’ll have to get closer to Clay. Lia’s parents would totally flip if they found out she was falling for a human boy, but the more time she spends with him, the harder it is to deny her feelings. After making a horrible mistake, Lia decides to risk everything to stop Clay from falling in love with the wrong girl.

Lia and her family are descendants of the Little Mermaid, which gives the story an interesting connection to the fairy tale. In addition, one of the Mermaids is a siren and her ability to manipulate will leave readers on edge. Much of the dramatic tension in this story is saved for the multi-chapter conclusion that quickly builds suspense and ends with a surprising twist.

The Mers living on land rarely return to the ocean, which keeps the story one-dimensional. While Lia’s desire to do what is right is admirable, her inner struggle is predictable and tedious. Lia fantasizes about kissing Clay but knows it is forbidden for a Mer to love a human. While the story doesn’t describe anyone having sex, there is abundant talk about sex. The Mer world is accepting of promiscuous behavior both in and out of marriage as well as having sexual partners of both sexes.

Emerge starts out strong with many cute sayings from the Mer world. Unfortunately, Emerge uses teenage angst, a love triangle, and ancient potions to create a typical teen romance. The narrator, Lia, is the only well-developed character, but her inner dialogue is tedious. Readers who are looking for an interesting Mermaid story will find Emerge lacking in originality and over-focused on sexual desire. Readers looking for a unique, memorable story may want to leave Emerge on the shelf.