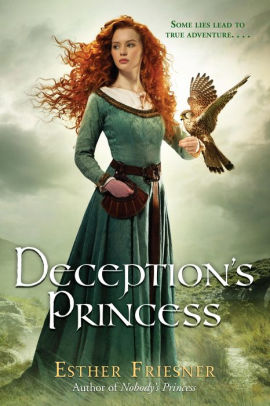 As princess of Connacht, and the last of six daughters, Mauve’s life should be perfect. As she matures, rich and powerful men begin to notice her because of her beauty and dowry. After all, who wouldn’t want to marry Mauve and become the next high king?

But Mauve must learn how to keep her suitors at a distance without offending them. She must learn who can be trusted and who is an enemy.

When Mauve becomes friends with Odran, the son of a visiting druid, she learns what true friendship is. But she also learns that having a friend can lead to danger—both for herself and Odran. In the end, will Mauve stay loyal to her family or will she choose to follow her own heart?

Mauve is a feisty heroin with the spirit to go after what she wants. At times she can seem ungrateful and selfish. As she tries to figure out who she is, she often endangers herself and those around her. However, the reader can understand her struggle to find a path of her own.

The book is interesting, but it is not a page-turner because of a lack of action. However, because most of the violence is not described, the book is suitable for younger readers. Additionally, the ending is satisfying enough on its own that the reader can choose to end the series after book one or to continue on to read the second book, Deception’s Pawn.

Sexual Content
• The queen has asked the fosterlings girls to try to find out where Odran disappears each day. When Mauve finds out about it she thinks, “Our fosterlings girls aren’t hunters, and flirting with Odran won’t work, but what if they flirt with someone who is a hunter? A good one? There were any number of young men under our roof who fit that description and who would willingly trade their tracking skills for kisses and the promise of more.”
• Odran slips his arm around Mauve’s waist and they kiss. “His lips still held the taste of the bread I’d brought for us to share and had a faint savor of sweetness. I was so startled by his kiss that though I kissed him back, I stood like a stone in his arms.” After the first kiss, “He was about to gather me into his arms again, but I was quicker. Now I knew what I wanted, and I was the one who led the way. Oh, such a soaring feeling. So sweet, so free, and so wrapped in its own enchantment that we hovered in a moment outside of time.”
• In another scene Odran and Mauve kiss. “He moved so desperately fast that our teeth collided and my mouth was crushed . . . I thought I was going to die from lack of breath and I didn’t care…I yearned for him all the more and held him fast.”

Violence
• Mauve’s friend Kelan is killed because “he claimed he overheard my darling mutter that someone else deserved that damn piece of meat. False! False! He refused to hear my beloved’s oath that he’d said no such thing, challenged him to fight it out and killed him at the second blow.” Later on, Mauve finds out that her father ordered Kelan’s death because Kelan taught her how to use a sword.
• Odran’s father finds out that he has been helping injured animals. Odran’s father is so upset that he kills the animals. “The blackthorn stick lashed down. There was a sickening sound of impact and agonized yelp, and Muirín lay stretched dead of the floor. I was still frozen by the horror of that small broken body when Master Íobar strode to where the hare crouched, trembling, and destroyed her too.” When Mauve and Odran question Master Íobar, he strikes Ordan.
• It is hinted that one of the men hits his servants.

Drugs and Alcohol
• Often the king entertains guests. During the nightly feast there is mead. One evening the men are “overcome by all the mead and Gaulish wine they’d been drinking.”

Language
• Damn is used by one of the servants.

Spiritual Content
• Because the story takes place in Ireland, there are references to the Fair Folk, the Otherworld, as well as important times of year such as, “Samhain, the time of shadows, the turning of the year from light to dark. The border between our world and the realm of the spirits grew as thin as frost on a blade of grass. Few dared to venture outside on that night for fear of meeting the fair folk or the dead.”
• A druid is a major character in the story. Maeve explains, “. . . druids and bards were often touched by Lugh, the god of poets.” Later in the story, the men plan to take a trip to, “watch horses run and men compete in countless athletic games to honor the god Lugh . . . ”
• Mauve’s father is afraid of a druid because “he is a man who can speak to the gods! He reads their desires and commands our sacrifices . . . he has the power to curse us down to the marrow of our children’s bones!”
• As Maeve takes a walk she thinks, ”this snowfall was a gift from the Fair Folk, from the gods, a magical spell that transformed familiar places with glittering enchantment.” Later on in the story, she thinks, “the gods seemed to listen.”
• Mauve becomes upset when an animal she was caring for dies. “I don’t know if he buried the body or left it for Flidais to find. Goddess of wild things, lady Flidais, take back your own, I prayed. Let the last gift of his body feed your other children. Let his spirit find peace.”
• Mauve keeps a piece of her dead friend’s sword. When she does she thinks, “At Samhain, when the dead bring their grievances to the living, no angry spirit came to haunt me. That was how I knew I’d done the right thing.”
• When Mauve’s mother becomes pregnant, “there was no counting the number of offerings my parents made to the goddess Brigid in her role as blesser and helper of childbirth.”
• Mauve’s friend Odran takes care of injured animals. His mother taught him how to care for animals. As he tells how he learned his skill, Odran explains that his father did not like the animals but, “Mother’s friend was there to remind him that he owed my life to Flidais, the goddess who cares for wild things.”
• When the king announces that he will not travel to Tara for the rites, a druid yells at him, “Are you so weak that you’d sacrifice the safety of your people, the fate of all Èriu, and the gods’ favor because you must cling fearfully to one woman’s skirts? I tell you, you will bring a thousand curses on everything you love if you follow any path that keeps you from your appointed place at Tara this Samhain. I know it for every one of those curses will come from my mouth and break over Cruachan like a thunderbolt mighty enough to shatter stone!”
• A series of pranks occur and the people blame it on the fair fokes. One man suggest that, “Lord Eochu’s druid ought to read the omens and see what he’s done to offend the gods.”