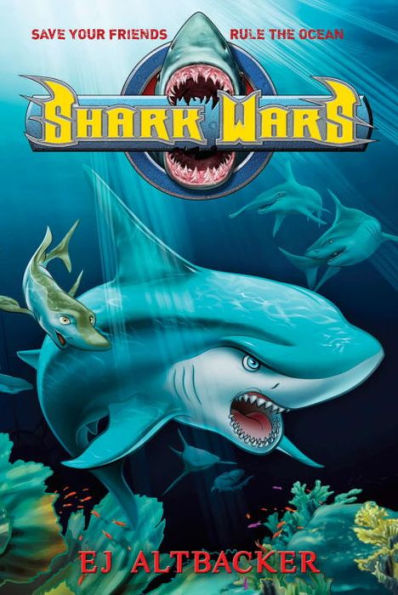 Gray is bigger than the other sharks in his clan and when his stomach rumbles, Gray follows the food and gets into trouble. Gray is banished from his reef and is forced to journey into the Big Blue. Luckily, his best friend Barkley goes with him. As they hunt for food, they enter an ocean world where the battle for hunting grounds is fierce. Gray and Barkley must find out which sharks are friends and which sharks are foes. How will the two friends keep from becoming someone else’s dinner?

The action-packed story follows Gray, who struggles with his large size and his hunger. Because the story is written in the third person point of view, the reader knows that sharks are keeping secrets from Gray. The reader knows that Gray should not be so trusting, adding suspense to the story.

Shark Wars creates a believable world where sharks rule the underwater realm. As the shark clans fight for food, Gray struggles to learn fighting skills, as well as to determine which sharks are trustworthy. Gray learns that even though he doesn’t like a fellow shark, that doesn’t mean they cannot work together for the good of the group.

As Gray meets other fish, he wonders if he is “swimming a good current.” In the end, he discovers the importance of loyalty and standing up for his friends. Shark Wars teaches the importance of doing what is right. The author tells Gray’s struggle for survival in an interesting way. Altbacker includes shark language such as landsharks, shiver, chop chop, and greenie. The cover of the book has a picture of each shark, which allows readers to understand the size and physical differences of characters. With 248 pages and no pictures, Shark Wars is a good choice for fluent readers. For those wanting a story that combines sharks, friendship, and fighting, Shark Wars will keep you entertained. But be warned, once you read Gray and Barkley’s story, you will be hooked and want to have the next book of the series waiting on the shelf!