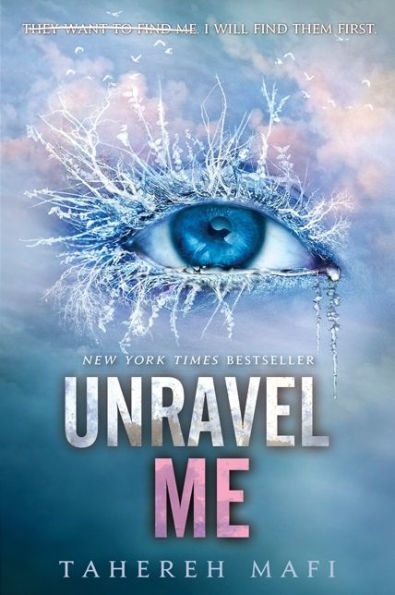 Juliette has escaped from The Reestablishment, who wanted to use her as a weapon. She no longer has to hide her love for Adam. But even though Juliette can now make plans, she can never be free from her lethal touch. And even though she doesn’t want to hurt people, she cannot contain her power, and others continue to suffer at her hand.

Juliette doesn’t decide if she wants to join the resistance until Warner threatens her friends. When her friends are taken captive, Juliette knows she must join the fight. But she is haunted by her past and terrified of her future. In the end, Juliette may have to choose between her heart or saving lives—including Adam’s.

Although Unravel Me has an interesting premise, readers will find it difficult to connect with Juliette because she cannot look past her own needs. Not only is Juliette whiny, but she also constantly berates herself and apologizes for her actions. Instead of focusing on understanding her power, Juliette allows her powers to take control, which leads her to hurt others. Instead of taking action, Juliette repeatedly says she’s sorry, but the apologies lack depth because she does nothing to learn how to control her power and prevent further harm.

The evil leader, Warner, reappears in the second installment of the series. Although Warner is self-centered and craves power, Unravel Me tries to paint him in a more positive light. Soon Juliette is confused by her growing attraction to the man who tried to kill Adam. Even though Juliette is trying to understand Warner, the three-way romance just doesn’t work. Juliette was so devastated when she hurts others, but she is somehow willing to overlook Warner’s killing nature. Instead of feeling sorry for Warner, the reader will be left confused. How can Juliette have intense romantic feelings for a power-hungry man who is willing to kill to get what he wants?

Unfortunately, Unravel Me spends so much time delving into Juliette’s emotional pain and indecision that other characters never have the opportunity to make more than a quick appearance. Instead, readers will have a difficult time caring about what happens. Although the story is unique, there are just too many plot twists that don’t make sense. Readers may want to consider leaving Unravel Me on the shelf. If you’re looking for a fast-paced story with a sprinkle of romance, try A Little in Love by Susan E. Fletcher or the Matched trilogy by Ally Condie.