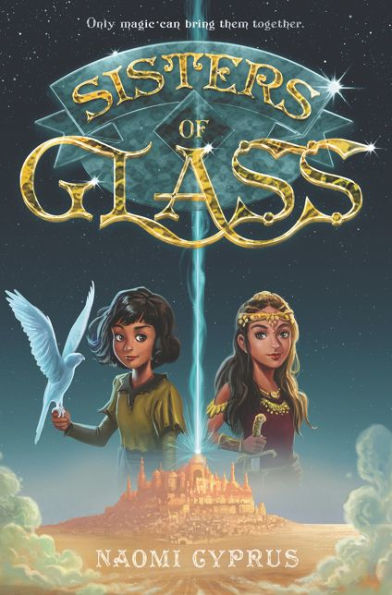 Halan, the heir to the Magi Kingdom, is different. Unlike every royal before her, she has no magical powers. Her parents fear that without magical powers, she will be unable to protect herself against a dangerous rebellion that is festering. Halan, on the other hand, is certain that she has nothing to fear and that her father will be able to reunite the Magi Kingdom in peace.

Nalah, a glassblower’s daughter, is an outcast among her peers. In New Hadar, she must hide her magical powers because magic is outlawed. Despite her efforts, her power is growing, and she is fighting the battle to control it. When an old family friend appears, Nalah begins to wonder if using magic is the only way to improve her and her father’s lives.

Two girls’ lives come crashing together when Nalah steps through a magical mirror that takes her to the Magi Kingdom. Each girl must overcome their fears and learn to trust each other before both of their worlds are shattered.

Full of magic and suspense, Sisters of Glass is a new series that is best suited for more advanced readers.  At the beginning of the book, the plot is complicated and confusing. The chapters begin with a history of each girl’s world and alternate between each girl’s point of view. Changing between points of view may be difficult for younger or struggling readers. The story also has graphic violence and the king kills several people in an effort to gain their magical powers. The death scenes may be disturbing, especially when Nalah watches her father die and then is stuck in the dungeon with his dead body.

Unlike most stories, Sisters of Glass, does not have a romantic interest. The platonic relationship between Nalah and her friend Marcus is refreshing and endearing. Readers will be able to connect to Nalah as she struggles with being obedient to her father. Nalah’s strong personality and her loyalty make her a character that readers can look up to. Unlike Nalah, Halan comes off as a bratty princess who thinks that she knows best. Even when her actions endanger others, her remorse is almost nonexistent. The contrast between the two girls is interesting, but Nalah is the character that readers will come to love.

There are several messages in the story. One message is treating everyone—no matter his or her station—with respect. This message ties in with the message of bringing peace to a kingdom. Only with justice, understanding, and cooperation can peace ever be realized.