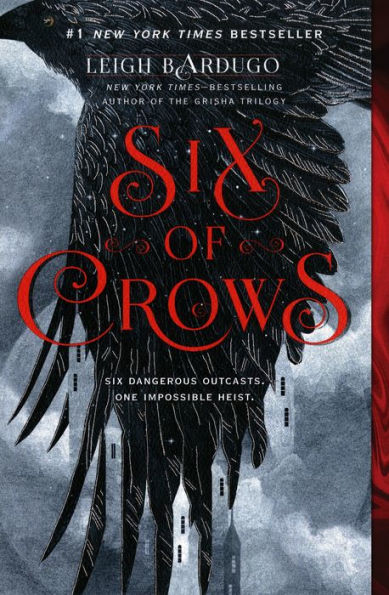 When it comes to the magic-wielding Grisha, nothing is ever easy. Especially not when Grisha are subjected to jurda parem, a dangerous new drug that not only enhances their latent abilities but also throws those same Grisha into a never-ending cycle of addiction and suﬀering.

Now, the only man who knows the formula to jurda parem, Bo Yul-Bayer, is locked up in the Ice Court, one of the most secure prisons in the world. There are many people looking to free Bo Yul- Bayer in order to use his knowledge, but Kaz Brekker is hired for the exact opposite.

Kaz and his crew, Inej, Jesper, Nina, Wylan, and Matthias, are about to breach the toughest prison in the world to free Bo Yul-Bayer and make sure he doesn’t fall into the wrong hands. They could very well die or be imprisoned, but the promise of four million kruge (the main currency of their home city of Ketterdam) is all too compelling. Plus, the six want the chance to fix all the mistakes they have made over the course of their lives. Kaz and his crew are the best at being thieves, yet not every plan can go perfectly. Jurda parem could ﬂip the world on its head, and if the six fail, the world could plunge into a world war.

Bardugo’s Six of Crows is an adventurous story from the very beginning. The story follows the distinct personalities of gang leader Kaz, the silent assassin Inej, the sharpshooter Jesper, the Grisha Nina, the aristocrat Wylan, and the Fjerdan witch-hunter Matthias. The story ebbs and ﬂows between the six main characters and their grand plan to sneak into the Ice Court to free the maker of a powerful drug.

There’s suspense, great action, and wonderfully compelling characters. Most of all, there’s a great sense of progression, both in the overarching plot development and in the main six characters.

Bardugo incorporates the members of Kaz’s crew into the ﬂow of the story, and each character is vital in the plan to inﬁltrate the Ice Court. For instance, Matthias was once a guard was stationed at the Ice Court, allowing him to be the one to create a map of the prison. Each character’s backstory also comes into play quite frequently, bringing forth the idea that each member is struggling with something that has been haunting them for years. This is a strength of Bardugo’s writing, as her themes of overcoming one’s past and staying true to one’s feelings play out brilliantly. The biggest example of this is found in Matthias and Nina’s relationship. The two are obviously in love, but because one is a Grisha and the other is a Grisha hunter, the two often get very close to killing each other, quite literally. In the end, they manage to overcome their past prejudices and open up to each other.

Overall, Six of Crows is a wonderful read for any young adult reader. Its main characters are incredibly likable and the story ﬂows well. The plot isn’t overly complicated, though there are a lot of characters to keep track of. Six of Crows is a page-turner that will have readers wanting more. For readers who want a blend of romance and a group of skilled characters pulling oﬀ a heist, Six of Crows is deﬁnitely the right choice. This novel also would be best suited for mature young adults.