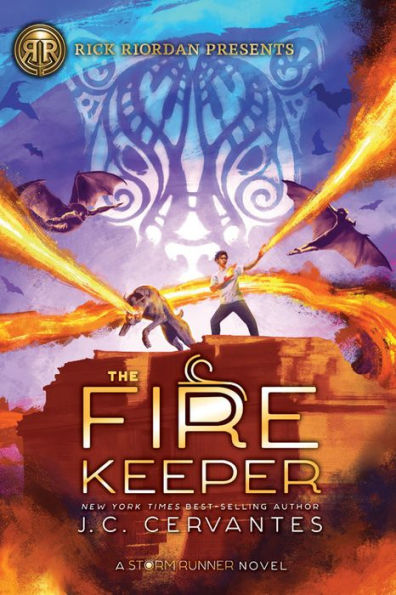 Living on a secluded tropical island should bring happiness to Zane Obispo. He is surrounded by his family and his friends. Zane is frustrated that he still can’t control his newfound fire skills that he inherited from his father. Zane is also convinced that he is the only one who can save his father, the Maya god Hurakan, who is now in prison. Plus, there is a painful rift between him and his dog ever since she became a hellhound.

Zane and his shape-shifting friend, Brooks, plan to take action and find a way to save Hurakan. But their plans come to a sudden halt when they discover that their island home is a prison. They can’t leave the island. When another godborn shows up, Zane and Brooks know they must come up with a plan to save Hurakan as well as the godborns who are in danger. Zane has no idea how to find the godborns or who would have taken them hostage.

Zane and his friends must race against time and save his father before he is executed. But first he must find the godborns before they can be hunted down and killed. In a world where Maya gods cannot be trusted, who can Zane trust to lead him in the right direction? How can a mere boy save both the godborns and his father?

The Fire Keeper is an action-packed adventure that never lacks a dull moment. As Zane and his friends jump through portals looking for clues to the whereabouts of the godborns, they meet several gods and monsters. Even though Zane doesn’t trust Ah-Puch, the previous god of death, he teams up with the god in a desperate attempt to save both the godborns and Hurakan. The constant question of who can be trusted adds to the suspenseful tone of the story.

Before readers pick up The Fire Keepers, they will need to read The Storm Runner. Zane’s story includes a huge cast of characters—monsters, magical creatures, godborns—which are introduced in The Storm Runner. Another aspect that may cause readers confusion is when Zane and his uncle occasionally mix Spanish words into their dialogue. Although readers should be able to use context clues to understand the word’s meaning, struggling readers may find the mix of English and Spanish difficult. Both The Storm Runner and The Fire Keepers have a complicated plot and an extensive cast of characters which may intimidate struggling readers.

All of Zane’s friends make an appearance in the second installment of the story. The addition of Ren, who is also a godborn, gives the story more humor. Ren is convinced that the Maya gods are aliens, and her refusal to change her mind breaks up the tense scenes. In addition to Ren, Ah-Puch has a starring role in the story which allows readers to see the god of death in a unique way. Some readers may be disturbed by Ah-Puch because he drinks bat’s blood to gain power. For example, he grabbed several bats and “snapped their necks, and turned his back to us as he drank their blood.”

The Fire Keeper brings the magic of Maya mythology to life in a fast-paced, action-packed story that will leave readers with a new understanding of the complicated nature of people (and gods). Zane is a very likable character, who clearly cares about others. The Storm Runner series is perfect for fans of the Percy Jackson series or of Aru Shah and the End of Time. However, Zane’s story takes a more serious tone and lacks the humor of the other series.