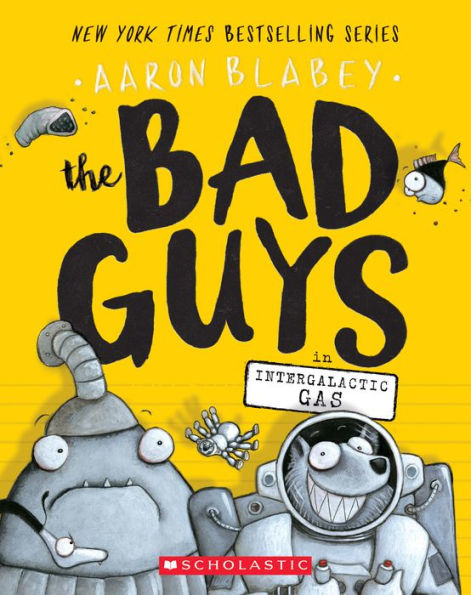 The bad news? The world is ending. The good news? The Bad Guys are back to save it! But, they might have to “borrow” a rocket, there might be something nasty in one of the spacesuits, and Mr. Piranha might have eaten too many bean burritos. Surviving this mission may only be one small step for man, but it’s one giant leap for the Bad Guys.

Younger readers will giggle their way through The Bad Guys in Intergalactic Gas. Wolf and his friends head into space in order to track down the villain Marmalade. The Bad Guys are convinced that they can keep Earth safe, but readers will never expect how bean burritos and farts help save the day. The story contains many humorous events, but also uses body humor. For example, when Wolf finds Piranha in a spacesuit, Piranha is embarrassed to admit that “I needed somewhere to poop out my burritos and I decided to do it in the spacesuit.”

The Bad Guys in Intergalactic Gas pulls readers into the text in various ways. The large text has nine or fewer sentences per page, and many of the words are huge and bold. In addition to the large text, black-and-white illustrations appear on every page. Some of the illustrations are full-page, while others appear in panels. The illustrations add to the humor by showing the story’s actions as well as the characters’ facial expressions.

Even though The Bad Guys in Intergalactic Gas is not great literature, the story will engage readers and help them build reading confidence. Readers will enjoy the silly situations, plot twists, and unique characters, including the character Piranha, who sprinkles Spanish words into his dialogue. Each book begins with news reporter Tiffany Fluffit recapping the previous book’s events; however, readers will get maximum enjoyment if the books are read in order.

The Bad Guys Series will introduce the joy of reading to younger readers and have them clamoring for the next book in the series—The Bad Guys in Aliens vs. Bad Guys. Readers who enjoy the silly humor of The Bad Guys Series may also want to try the Inspector Flytrap Series by Tom Angleberger and Cece Bell. Both series use humor and an unexpected character to show children that reading can be fun.