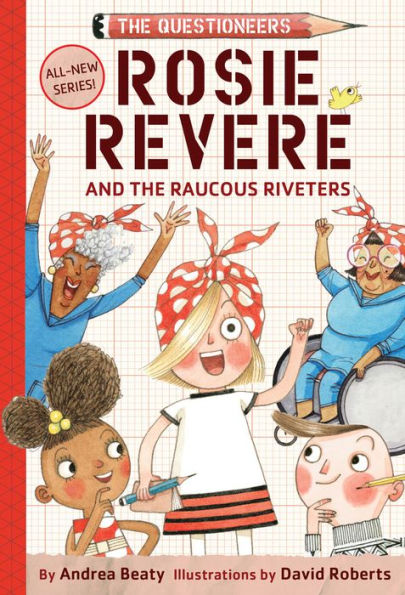 Rosie Revere loves engineering. When Rosie’s Aunt Rose and her friends—a group of women who built airplanes during World War II—ask her to complete an important project, Rosie is excited to help. One of the Riveters has broken both her wrists and can’t participate in the Art-A-Go contest. Rosie and her friends use all of their knowledge to invent a tool to help her paint. Building a paintapolooza comes with setbacks. When Rosie begins to lose hope, her friends step in to help. Will Rosie and her friends be able to finish the paintapolooza in time for the big event?

Readers will initially be drawn to Rosie Revere and the Raucous Riveters because of the cheerful illustrations but will continue reading because of Rosie’s personality. Rosie is a strong character who uses problem solving to create her inventions. Rosie’s struggle is realistic; she doesn’t find the solution to her problem without failure. When Rosie feels “frustrated and frazzled,” she uses smart strategies to refocus. For example, Rosie’s great imagination causes her to focus on what-ifs, and “when that happened, Rosie had to remind herself to stop and think differently.”

Rosie’s illustration notebook, which contains lists and alliterations, will engage readers transitioning to chapter books. Rosie and her friends use imagination and teamwork to help someone in need. The story portrays the older generation in a positive light, and through her interactions with the Riveters, Rosie learns the importance of strong friendships. The story’s positive message is clear: “The only true failure can come if you quit.”

After the story concludes, additional text is included: a poem about a valve, information on valves, and historical information about the Riveters. The book ends with a “think about this” section that guides readers to apply the story to their life.

Instead of focusing on a simple plot, the book delves into too many characters and too many subplots. For instance, Rosie misinterprets one character’s behavior, but later discovers that the person was allergic to sunlight. Although there is historical information about the Blue River Riveters, the facts do more to complicate the story. For beginning readers interested in engineering, readers may want to begin with the Ellie, Engineer series before moving to The Questioneers series.