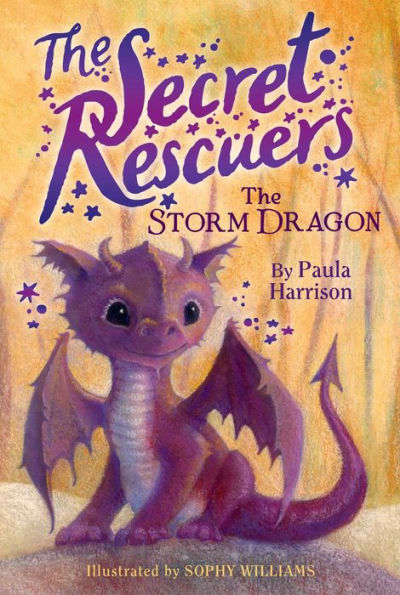 Sophy was picking apples in an orchard when a cute dragon falls from the sky. The injured little dragon, named Cloudy, is in danger. The queen and the captain of the guard don’t like magical creatures. Sir Fitzroy and his guards are searching everywhere for Cloudy. They want to lock him in the dungeon.

With the help of a magical stone, Sophy is able to talk to Cloudy. It will take courage and creativity to keep Cloudy safe. With the help of a friend, Sophy knows how she can help heal Cloudy’s injured wing…but how can Sophy sneak Cloudy out of the castle, find the healing plant, and save her cute purple friends?

The Dragon Storm shows that you don’t have to be royal in order to be special. Sophy is a castle maid, but she is still able to keep Cloudy safe. Sophy’s kind nature shines as she smuggles Cloudy into the castle. Suspense is created as Sir Fitzroy and his guards hunt for the dragon; however, his exploits are silly and will cause readers to giggle. Readers will enjoy seeing Cloudy using his magic to stop Sir Fitzroy from yelling at Sophy. With a cute dragon, a sweet friendship, and a fairy tale setting, The Dragon Storm will delight younger readers.

The story uses easy vocabulary, simple sentence structure, and black and white illustrations to make The Storm Dragon accessible to younger readers. Illustrations appear every 1-3 pages, and they help readers understand the story’s plot. Readers will fall in love with Sophy and will be excited to read the next book in the series, The Sky Unicorn. Much like Harrison’s Rescue Princess Series, The Secret Rescuers will encourage readers to be kind to animals, brave in the face of danger, and ready to help a friend in need.