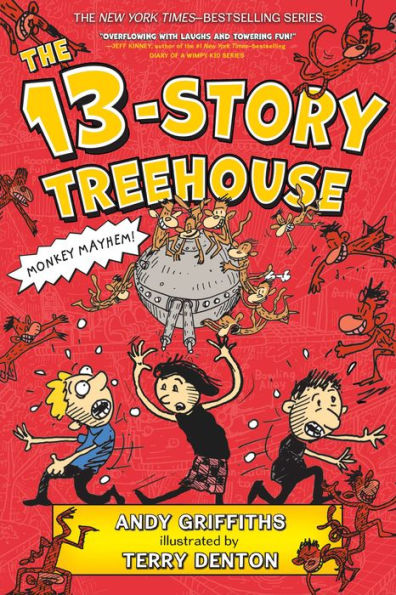 Andy and Terry write books together while they live in every young boy’s dream—a 13-story treehouse! The treehouse is the most amazing treehouse in the world—complete with a bowling alley, a see-through swimming pool, a marshmallow machine that follows you around and shoots marshmallows in your mouth, a secret underground laboratory, swinging vines, a tank of man-eating sharks, and an endless lemonade fountain. It seems like the fun never ends for Andy and Terry.

But when faced with a range of slapstick scenarios, they soon realize they still have not finished their next bestselling book. With the threat of going back to their atrocious old jobs, they must bond together as they fight off a pack of wild monkeys, a giant gorilla, and a sea monster while writing their next book before their deadline. Will Andy and Terry succeed or will they be forced to go back to their old jobs – at the monkey house?

Griffiths and Denton created a silly, funny, and ridiculous story that readers will laugh at from beginning to end. The book also teaches readers about the importance of friendship. Andy and Terry demonstrate the importance of friends working together in order to solve problems. Without each other, they would not be able to survive a giant gorilla, a sea monster attack, or even write a book. Also, the funny black and white illustrations contribute to a positive reading experience and will help engage even the most reluctant readers.

Even though the story is funny, much of the humor comes from bathroom jokes and immature humor. Many of the jokes are inappropriate for young readers, and sometimes the jokes can be cruel and inconsiderate, such as when Terry painted Jill’s cat bright yellow without telling her. These jokes can leave a bad impression on a young audience. Readers will either love or hate The 13-Story Treehouse. Some will find the story laugh-out-loud funny while others will find the repetitious nature of the story and Terry and Andy’s jokes crude and annoying. But in the end, readers who want a story that’s ridiculously outrageous should pick up The 13-story Treehouse.