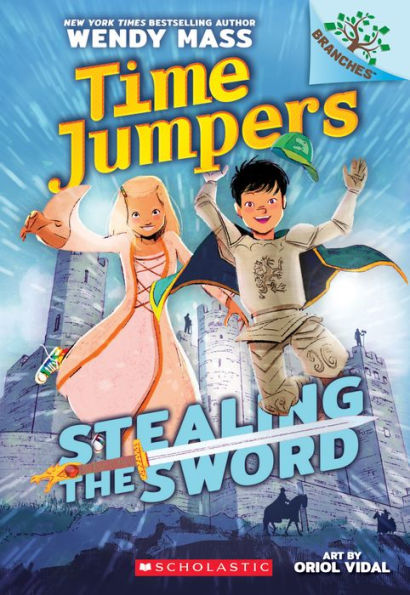 Siblings Chase and Ava not only enjoy spending time together, but they also work together to help King Arthur. Although the two easily find the clues they need to solve the mystery, younger readers will appreciate the non-scary suspense and the glimpse of King Arthur’s time period. Even though Chase and Ava go back in time, the story focuses on the two sibling’s dilemma and has few historical facts. Even though the story contains few historical facts, Stealing the Sword combines non-stop action, mystery, and a little bit of history to create a story that independent readers will enjoy.

Stealing the Sword is part of Scholastic’s Branches early chapter books, which have easy-to-read text and illustrations on every page. The story uses short descriptions and dialogue to keep the story moving at a fast pace. The black and white illustrations appear on every page and help break up the text into manageable sections. The villain Randall, who has two colored eyes, pops in and out of the story which keeps the suspense high. Stealing the Sword introduces several characters that reappear in later books, which requires the Time Jumpers series to be read in order. Stealing the Sword focuses on a positive sibling relationship and will entertain readers who are ready for chapter books.