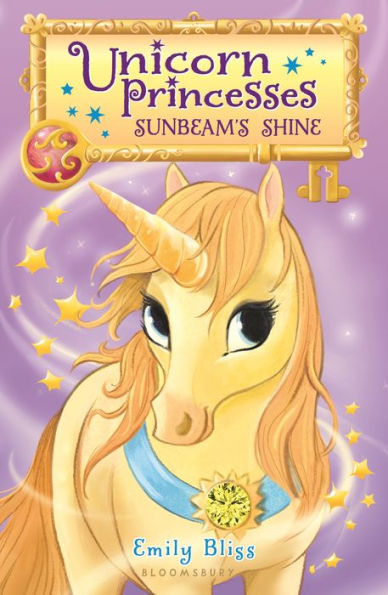 Princess Sunbeam’s magical gem disappears when a wizard-lizard accidentally casts the wrong spell. Without her magic yellow sapphire, she loses her ability to create light and heat. Princess Sunbeam needs to find a human girl—one who believes in unicorns. A human girl is the only one who can help her reverse the spell and find her gemstone.

When Princess Sunbeam goes to the human world to search for a human girl, she finds Cressida. Cressida loves everything unicorns, and despite her parent’s disbelief, Cressida knows that unicorns are real. When Cressida meets a unicorn, Princess Sunbeam, she’s excited to travel to the Rainbow Realm.

Girls may want to pick up Sunbeam’s Shine because of the beautiful sparkly cover; however, the cover isn’t the only positive aspect of the book. As Cressida searches for the gem, she shows how to use problem-solving and communication skills. The addition of talking desert creatures adds interest to the story.

In the story, the sand dunes are upset with the cacti because of a misunderstanding. As Cressida helps the friends solve their problems, the reader learns the danger of keeping secrets.

Cressida is a smart, considerate character that uses good communication skills to help others. When she travels to the Rainbow Realm, she makes sure to leave a note for her parents so they do not worry. Sunbeam’s Shine hits the mark for its intended audience. Younger readers who want to add a little magic and sparkle to their lives will enjoy jumping into the Rainbow Realm.

Sunbeam’s Shine is the first in this series written for children who enjoy chapter books. Beginning readers may struggle with the amount of text on a page as well as the long descriptive passages. The pictures scattered throughout the book are adorably cute; however, they only appear about every three to seven pages. This chapter book would be a good story to read aloud to beginning readers.