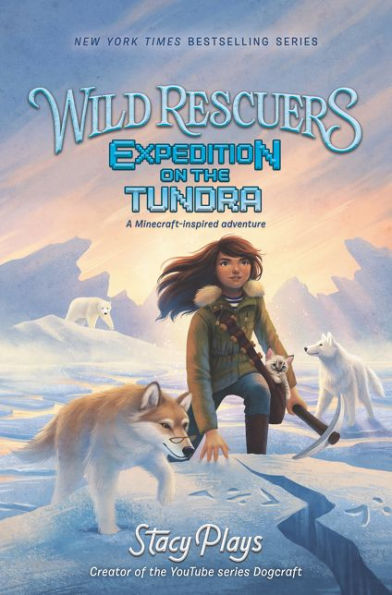 When a group of researchers plans to enter the forest in order to tag wolves, Stacy and her pack know they must flee. Even though the journey is unexpected, Stacy is excited to learn about a new biome. Stacy and the wolves go over the mountains and into the harsh arctic region.

Stacy has always known that her wolves were different than other animals. After all, other wolf packs do not rescue animals and care for an orphan girl, but Stacy’s wolves are beginning to reveal supernatural abilities. While on their journey, Addison finds some hieroglyphics in the snow. Following Addison, the pack goes deeper into the harsh tundra biome. Can they survive long enough to discover where the pack’s supernatural abilities came from?

Stacy’s expedition on the Tundra takes the reader into the artic and introduces them to artic wildlife. While traveling, Stacy and her pack find a narwhal, who is unable to come to the surface to breathe. The pack uses its supernatural abilities to save the narwhal. Even though the animal encounters are interesting, most of the story revolves around Addison finding hieroglyphics. During their travels, the pack begins to display more supernatural abilities. However, the story never explains why the wolves have the abilities, which makes the events unrealistic.

Unlike the previous books in the series, Expedition on the Tundra has some plot elements that are not believable. In just a week, Stacy and her pack are able to travel to the artic, save several animals, study hieroglyphics, and return home. In the conclusion, Stacy and the pack meet an ancient wolf, who dies after a short period of time. Through telepathy, the wolf shows Stacy the humans that left the hieroglyphics. Unfortunately, the conclusion is anticlimactic and leaves the readers with too many questions.

Each chapter begins with an illustration of Stacy’s animal friends. Other black and white illustrations are scattered throughout the story. The illustrations will help readers visualize the story’s events and the hieroglyphics. Some readers may have difficulty with some of the advanced vocabulary, such as annals, emanate, and swath. The end of the book has a word glossary as well as information about a bear biologist.

While the first two books in the Wild Rescuers series have plenty of action and suspense, Expedition on the Tundra’s slow pace may frustrate readers. Along the journey, Stacy and the pack help several animals; however, the rescues lack any element of danger and suspense. In the end, Stacy is able to translate the hieroglyphics, but the writings do not explain why the wolves have powers. Expedition on the Tundra’s focus on the mystery of the wolves’ power lacks excitement and suspense. However, readers who have read the first two books of the series will enjoy Stacy’s evolving relationship with the wolf pack.