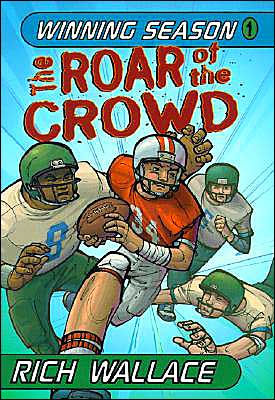 Manny has always been a star on the soccer team. This year, he has decided to try football instead. Manny is determined to get in the game even though it’s his first year as part of the Hudson City Hornets. Manny doesn’t want to sit on the bench, but compared to the other guys, Manny isn’t big. When he tries to tackle the offense, he ends up eating dirt. When the team loses, the coach sits Manny on the bench. Manny needs to prove that he is as tough as anyone else out on the field. Can he prove to his coach, his teammates, and himself that he belongs on the field?

Sports lovers will enjoy the play-by-play football action, both during the games and on the practice field. Many boys will relate to Manny because even though he is small, he still wants to make an impact on the field. Manny knows he is fast, but he worries because, “the other players had everything that he didn’t have—strength, height, confidence.” Throughout the story, the football players appreciate Manny’s efforts and even consider him part of the team, even though he sat on the bench for the entire game.

Although the story focuses on football, Manny’s family also appears frequently. Manny’s two-parent family is portrayed in a positive light. Manny’s little brother adores him, which adds depth to the family dynamics. One drawback of the story is a brief conversation in which Manny and another boy talk about a girl who is “short but built.” During the conversation, the boy makes it seem as if every girl in school “is after” the star football player. Because many children model behavior in books, parents may want to have a conversation about this event.

The simple plot and easy-to-understand vocabulary make The Roar of the Crowd an easy read for younger readers. Readers will learn the importance of focusing on an individual’s strength and never giving up. However, there are better sports books for younger readers, such as Soar by Joan Bauer or the Ballpark Mystery series by David A. Kelly.