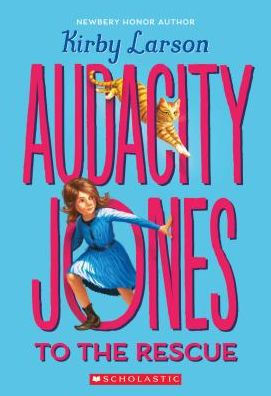 Audacity Jones To The Rescue

Audacity Jones doesn’t complain about being raised in Miss Maisie’s School for Wayward Girls.  Audacity’s life isn’t full of adventure, but she has friends and a clever cat named Miniver. When Audacity is sent to the Punishment Room, which is often, she finds plenty of books to fill her time.

When Commodore Crutchfield visits the school seeking an orphan, Audacity volunteers to go on a secret mission to Washington D.C. Soon, Audacity begins to question the Commodore’s intentions. As she tries to discover the Commodore’s true mission, she meets interesting new people that help her along the way.

Audacity is a plucky, optimistic heroine, who is full of adventure. When circumstances are bleak, Audacity keeps her wits and looks at the bright side of things. The story weaves the girls from Miss Maisie’s School into Audacity’s story, which highlights the friendships Audacity left behind.

The historical novel will give readers a glimpse of life in the 1800s as well as a peek inside President Grant’s life. Audacity Jones to the Rescue is an interesting story with unique characters that add to the book’s enjoyment. Although the story is easy to read, the detailed descriptions and lack of action at the beginning of the story may make it difficult for some readers to make it to the end of the book. However, the action and suspense pick up at the end of the story and leave the reader with a satisfying conclusion.