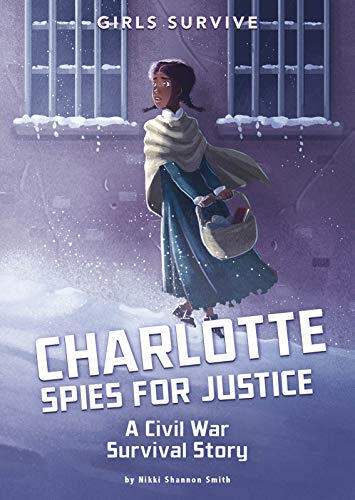 “I am not a spy,” Miss Van Lew said. “I am a patriot. I want to see my country united and all people free.” –Charlotte Spies For Justice

Twelve-year-old Charlotte lives on a plantation in Richmond, Virginia, where the American Civil War is raging. All around her, citizens and the Confederate army are fighting to protect slavery — the very thing Charlotte wishes would end. When she overhears the plantation owner conspiring against the Confederates, Charlotte knows she must help. Maybe together they can help the Union win the war and end slavery. Helping a spy is dangerous work, but Charlotte is willing to risk everything to fight for what is right — justice for all people.

Charlotte Spies For Freedom is full of action and suspense that focuses on the heroic deeds of many historical events. While Charlotte is fictional, she is a relatable character who shows bravery despite her fear. Several times, Charlotte visits Libby prison. Even though the story shows the harsh conditions of Libby prison and includes the death of several Union soldiers, no gruesome details are given. However, the story highlights Charlotte’s fear of being caught and harmed. Despite her fear, Charlotte is willing to risk her life to help the Union cause. She says, “I’m willing to give my life away if it helps free my people.”

Even though Charlotte is a fictional character, many of the book’s characters are based on real people. This includes Elizabeth Van Lew, who gathered important information to pass along to the Union Army. Readers will be fascinated with the different ways Elizabeth Van Lew used to send messages, including using invisible ink and ciphers. She also hides messages in hollowed-out eggs, the heels of boots, and loaves of bread. Several times, Charlotte comments on Elizabeth Van Lew’s “odd” behavior; the author’s note explains that Elizabeth Van Lew’s strange behavior was another way she disguised her activities.

Another historical spy is Mister McNiven. Despite being surrounded by war, Mister McNiven greets Charlotte each morning by saying, “It’s a good day to be alive.” At first, Charlotte doesn’t understand his optimism. However, she soon realizes Mister McNiven believes this because “he knew he was doing something important. He hoped for a better tomorrow and he was doing his part.”

To make the story easy to follow, each chapter begins with Charlotte’s location and the date. Every ten to seventeen pages there is a black-and-white illustration that focuses on Charlotte’s activities. One illustration shows a Confederate soldier hitting Charlotte. The back of the book contains an author’s note that goes into more detail about the historical facts of Elizabeth Van Lew, a glossary, and three response questions to help readers connect to the reading material.

Charlotte Spies For Freedom is an engaging story that shows how ordinary people were willing to lay down their lives to fight for the freedom of all people. The story, which uses kid-friendly descriptions, is both educational and entertaining. Since the story is full of danger and action, it will appeal to a wide audience. Readers interested in historical fiction can also learn about the Underground Railroad by reading Long Road to Freedom by Kate Messner.

“I am not a spy,” Miss Van Lew said. “I am a patriot. I want to see my country united and all people free.” –Charlotte Spies For Justice