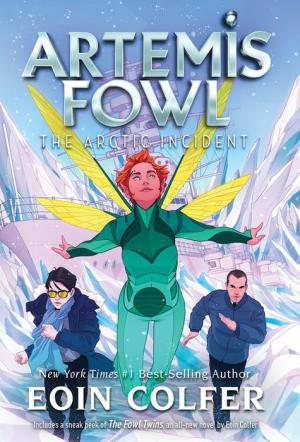 After years of searching for his father, Artemis Fowl receives a ransom note for him; it’s a nightmare and a relief. Artemis’ father is alive—but Artemis has no idea how to rescue him without being killed himself. At the same time, Holly Short discovers something unthinkable: goblins are trading with humans. Exposure could mean a war between the fairy people and humans, and Holly can think of only one human who could be responsible.

When Holly brings Artemis in for questioning, he sees it as the perfect opportunity. He will help them find out which humans are trading with the goblins, and in return, they will help him rescue his father. For their mission, Holly and Artemis head to the Arctic. However, everything goes sideways when halfway through their rescue mission, their weapons die, and they are ambushed by goblins. The goblins are planning a revolution and they’ve clearly had inside help. The question is, who can Holly and Artemis trust, and will they be able to get back before the goblins take control?

Artemis Fowl and the Artic Incident is an action-packed sequel that will please fans of the original book. Holly Short and Artemis Fowl are hilariously at odds with each other as they are forced to work together. Joined by old friends, including Butler, Commander Root, Foaly, and Mulch, The Arctic Incident is equal parts nerve-wracking and hilarious. Readers will enjoy the bonds the fairies and humans make on their mission and will root for Artemis as he struggles to balance his criminal tendencies with the urge to help his newfound friends.

Told from a variety of different viewpoints, The Arctic Incident allows readers to see what is happening on all sides of the power struggle in a clear and enjoyable way. Readers will want to read the first book in the series before picking up this book, in order to understand the action and interpersonal relationships. Both Holly and Artemis continue their personal growth in a believable and heartwarming manner. Technology, fantasy, and feisty fairies are blended to create a fast-paced and fun story. The Arctic Incident does not disappoint, and readers will eagerly reach for the next Artemis Fowl adventure, The Eternity Code.