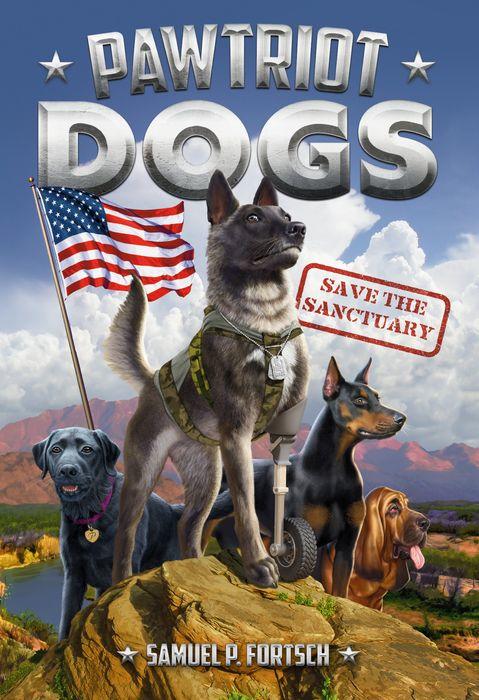 “Fixed. I really can’t stand that word. It suggests I’m broken. Well, maybe my spirit was broken. Maybe it still is. But just ‘cause something’s broken doesn’t mean it needs fixing, now does it?” Rico. –Save the Sanctuary

Former Army rescue dog, Sgt. Rico, a bomb-sniffing Malinois, is on his first mission in Washington, D.C. to save The Sanctuary animal shelter from the evil Mr. Mocoso. But does Rico have what it takes to lead the Pawtriots to victory and save his fellow canines?

Throughout the story, Army values—loyalty, duty, respect, selfless service, honor, integrity, and personal courage—are demonstrated through the animals’ actions. In addition, the importance of putting the mission first is reinforced when Chaps, a disabled military dog, gives his life so his friends can escape. In the end, it is the military’s values that allow Rico to become a hero by helping him realize that “soldiers don’t give up on themselves and they don’t’ give up on their fellow animals.”

Army sayings and terminology are used throughout the story. For example, when Rico feels like giving up, another military dog says, “I need you to embrace the suck.” Each time an army word or phrase is introduced, Rico explains what it means. For example, Rico explains that north south is “Army-talk for ‘nodding your head when you understand something.’”

Each chapter starts with the location, date, and military time which makes it easy to follow the timeline. Black and white illustrations appear every 1 to 6 pages and show the animals in action as well as some of the dangers they face—including the villain, rats and crocodiles.

Even though Pawtroit Dog is an illustrated chapter book, it hits on some difficult topics that may upset readers. For example, the dog catchers, which are called “Snatchers,” chase after the animals with the intent to capture and kill them. However, the animals manage to stay safe because they help each other and work as a team. The overall theme that is reinforced repeatedly is “it doesn’t matter if you’re small, young, weak, or even missing a leg—it’s what’s on the inside that counts. You have to have heart! That’s what makes a true Pawtriot.”

Save the Sanctuary is an action-packed story that revolves around two, three-legged military dogs. Readers will enjoy seeing Rico’s growth from a despondent dog to a true hero with a mission. Readers who want a patriotic story that is told from a dog’s point of view should put this highly entertaining story on their reading list. If readers like Pawtroit Dog, they should check out the G.I. Dogs Series by Laurie Calkhoven, which is also told from a dog’s point of view.

“Fixed. I really can’t stand that word. It suggests I’m broken. Well, maybe my spirit was broken. Maybe it still is. But just ‘cause something’s broken doesn’t mean it needs fixing, now does it?” Rico. –Save the Sanctuary