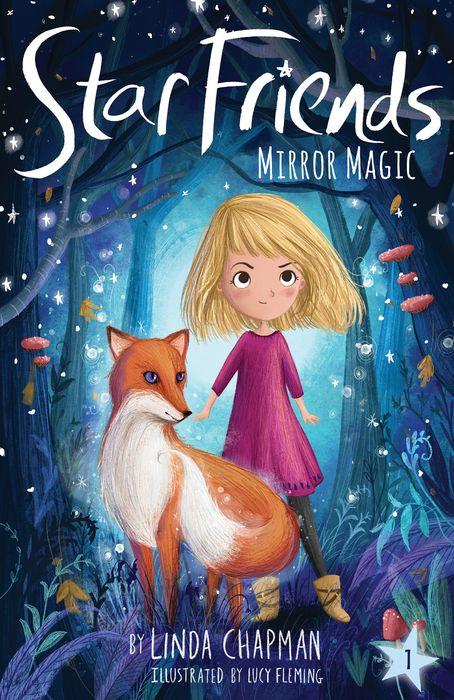 “Humans need people in their communities who know how to use magic to do good, people who can solve problems, stop arguments, take care of the environment, and heal things and people,” Willow. –Mirror Magic

Do you believe in magic? Mia and her friends do! And when they meet the Star Animals, a whole world of magical adventures unfolds in this new chapter book series, accompanied by black and white illustrations throughout.

Mia and her Star Animal, a fox named Bracken, must use their special powers to stop the forces of dark magic. Mia’s older sister has started acting strangely and the Star Animals sense dark magic is at work. Soon Mia discovers that the new compact mirror that her sister, Cleo, has been using must be to blame. Can the girls use their newfound Star Magic to help make things right?

Mirror Magic will appeal to young readers who love animals and magic. The story focuses on Mia, but it also revolves around her two friends, Lexi and Sita. Most of the story centers on the girls meeting the magical animals and learning how to use their own magic. However, Mia’s sister, Cleo, adds suspense and mystery to the story and in the end, the girls discover that a Shade has been manipulating Cleo.

In the story’s climax, the Star Friends and their animals, fight with the Shade. The scene with the Shade is scary and may upset some readers. Despite this, Mirror Magic does an excellent job of introducing the main characters, the magical animals, and the conflict with Violet, who turns out to be a Star Friend too. Mirror Magic sets up a world that is slightly predictable, but also full of mystery and adventure.

Mirror Magic is the first in a chapter book series that focuses on three friends—Mia, Lexi, and Sita—who are illustrated with different skin tones. The cute black and white illustrations appear every two to seven pages. Even though Mirror Magic will appeal to readers who are six and up, younger readers may have a difficult time with the more advanced vocabulary.

Star Friends will appeal to readers who enjoyed The Rescue Princesses Series and The Rainbow Magic Series. The story portrays Mia’s family in a positive manner, and while Mia and her friends are kind, they are not perfect. The girls clearly want to help others and they are even planning a baked food sale with the proceeds going to help an organization that protects endangered animals. The simple plot and sweet characters will appeal to animal loving early elementary readers.

“Humans need people in their communities who know how to use magic to do good, people who can solve problems, stop arguments, take care of the environment, and heal things and people,” Willow. –Mirror Magic