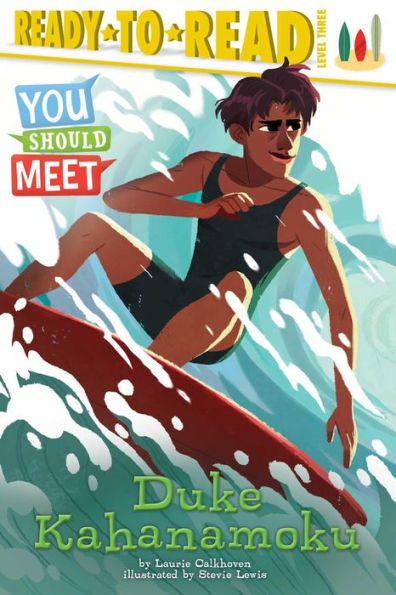 “In Hawaii we greet friends, loved ones, and strangers with Aloha, which means love. Try meeting or leaving people with Aloha. You’ll be surprised by their reaction,” Duke. –Duke Kahanamoku

Duke Kahanamoku loved living in Hawaii’s ocean. When he was four, Duke’s father taught him to swim. When Duke was a boy, he swam are race hosted by the Amateur Athletic Union (AAU). When Duke broke the world record for the hundred-yard freestyle, the AAU didn’t believe that Duke could swim that fast. Duke’s friends decided to take up a collection and send him to the mainland so he could try out for the Olympics.

Duke qualified for the 1912 Olympics. After he won a gold medal and a silver medal, he became one of the most famous swimmers in the world. Soon people wanted to see the “Human Fish.” Duke traveled around the country and surfed. Many people had never seen surfing, When Duke traveled to Australia, he showed others how to make a surfboard.

Even though Duke became famous because of his swimming ability, he also helped raise money for the Red Cross during World War I. He also taught others about water safety. Duke also was in more than two dozen Hollywood movies. “Because of the color of his skin, Duke was only hired for small parts like pirates, servants, and Native American chiefs.”

Duke was relaxing on the beach when a fishing boat capsized. Duke didn’t hesitate to jump in the water. With the help of his surfboard, he was able to save eight fishermen. Today, because of Duke’s heroic actions lifeguards have rescue boards. Duke is called the “father of modern surfing” because he introduced the world to surfing.

Duke’s true story describes his life from early childhood to his adulthood. Duke’s love of the ocean is apparent. Duke’s story is told both through words and pictures. Each page has realistic illustrations that show Duke’s life events. Even though Duke Kahanamoku is illustrated, the biography is intended for proficient readers. The story has challenging vocabulary words and complex sentence structure.

Duke Kahanamoku story shows how one man’s passion inspired others. However, Duke didn’t just use his talent to win Olympic medals. He also taught others about Hawaii. Despite being discriminated against, Duke kept quiet. “But he always knew in his heart these people were wrong to judge him by the color of his skin.”

“In Hawaii we greet friends, loved ones, and strangers with Aloha, which means love. Try meeting or leaving people with Aloha. You’ll be surprised by their reaction,” Duke. –Duke Kahanamoku