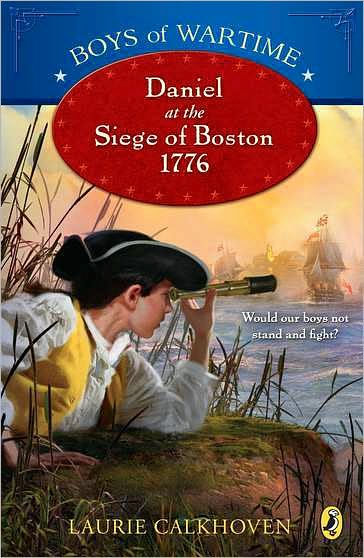 “Our liberty must be preserved; it is far dearer than life; we must defend it from the attacks of friends as well as enemies; we cannot suffer even Britons to steal it from us,” Dr. Warren. –Daniel at the Siege of Boston 1776

Daniel at the Siege of Boston 1776

Twelve-year-old Daniel helps his family in the family tavern. When English tea is dumped into the Boston Harbor to protest taxes, Daniel cheers. Then the British arrive, and soon Redcoats are taking over Boston. Soon everyone must take a side—support the British or join the rebels. Daniel’s family serves the British soldiers in their tavern to try to gain information and pass it on to the rebels.

When Daniel’s father leaves to join the fighting rebels, Daniel must help his mother in the tavern and help keep his sister safe. When Daniel overhears a crucial secret, he knows he has to cross British lines to deliver it to his soldier father and General Washington. He knows that liberty is worth fighting for, but is he brave enough to risk his life?

Daniel at the Siege of Boston 1776 brings the American Revolution to life through the eyes of a twelve-year-old boy. Despite the young narrator, the story is at heart a war story that doesn’t shy away from death. Even though the dead and wounded soldiers are not described in bloody detail, Daniel is deeply disturbed by the battle between the Redcoats and the rebels. Daniel witnesses wounded soldiers dying, which may upset some readers. Although Daniel agrees with Dr. Warren, who said, “Our liberty must be preserved; it is far dearer than life,” watching people die leaves a lasting impact on Daniel.

Even though Daniel at the Siege of Boston 1776 shows the importance of the American Revolution, the book is best suited for history buffs. Even though the story focuses on Daniel’s family, the long list of names may become overwhelming to readers. In addition, many historical figures, like John Hancock and Samuel Adams, are mentioned, but they never appear in the book. Readers who already know some of the key figures in the Revolutionary War will enjoy learning about the Boston Revolution through the eyes of a young boy.

Several times, Daniel acts out of fear, then later feels ashamed of his actions. However, Daniel’s father lets him know that the soldiers all feel fear. Daniel’s father tells him, “only the foolhardy are unafraid, Daniel. That’s not what bravery is. True courage is moving forward when you’re most afraid.” The story shows how the courage and perseverance of colonial men paved the way for America’s freedom. Daniel and the reader both learn that “Perseverance and spirit have done wonders in all ages. They’re far more powerful than even the mightiest of armies.”

Daniel at the Siege of Boston 1776 shows the brave deeds that led men to fight for liberty and allows readers to understand America’s history. The book ends with historical information about children’s roles in the American Revolution, the historical characters, a timeline, and a glossary. Readers who enjoy learning about America’s involvement in wars should add Calkhoven’s G.I. Dogs series to their reading list.

“Our liberty must be preserved; it is far dearer than life; we must defend it from the attacks of friends as well as enemies; we cannot suffer even Britons to steal it from us,” Dr. Warren. –Daniel at the Siege of Boston 1776