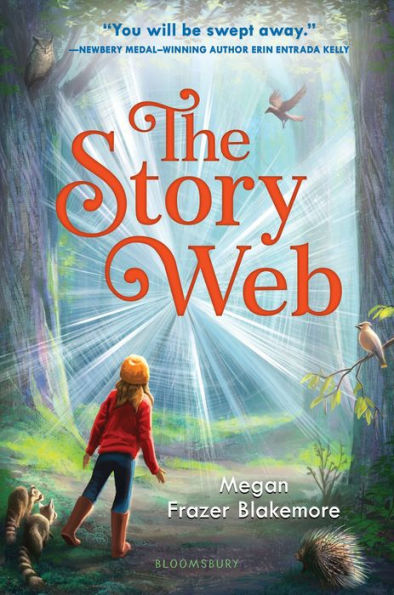 “When people get scared, they think the best way to deal with the problem is to go on the attack,” Mom. –The Story Web

When Alice was little, she found a gigantic spider web deep in the forest. Her dad called it the Story Web and told her how its strands were woven from the stories that hold our world together.

Years later, Alice’s dad has gone away for reasons Alice is sure are her fault. Now she won’t even talk about her dad—and definitely no longer believes his far-fetched stories. But when animals in town start acting strangely, she can’t ignore them. The Story Web is in danger—and the fabric of their world is breaking. The only way to mend it is to tell honest tales from the heart, even if they are difficult to share.

The Story Web tackles some heavy issues including friendship, hurtful rumors, and PTSD. The story focuses on Alice; however, the story is told from a third-person point of view and often shifts; it includes both human and animal points of view. The always-changing points of view break up the story’s action and may confuse some readers.

Although the story has an interesting premise, the storyline tries to do too much and lacks action. Alice’s father was in the military and has PTSD. Despite this, Alice feels like she is responsible for making her father go away. Throughout the story, Alice reads letters from her father that have many references to The Odyssey by Homer. Greek gods and the theme of the hero’s journey are also incorporated into the story. Readers who are unfamiliar with the Greek references will be confused. Readers may also have difficulties with the advanced vocabulary, such as precocity, coalition, and reprobate.

The story highlights the importance of teamwork and discusses what makes a person heroic. Alice thinks, “Some superheroes want to be heroes. Like Batman or Captain America. They make it happen. Other ones don’t really have a choice.” Alice learns that being a hero isn’t like in the movies, instead “it’s showing up, doing your job—that’s what makes a hero.” Despite the positive messages, The Story Web may be difficult for readers to slog through.

“When people get scared, they think the best way to deal with the problem is to go on the attack,” Mom. –The Story Web