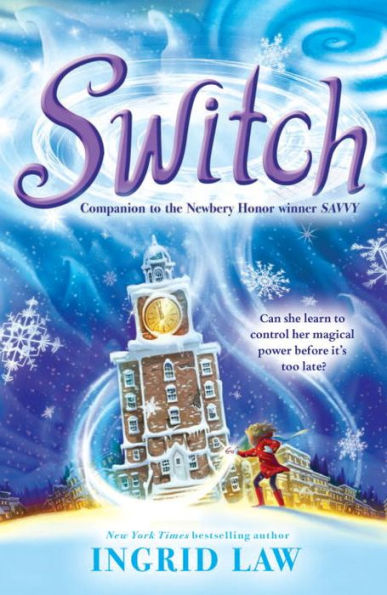 Other books by Ingrid Law

"My mom is going to kill me. Then, because she's a cardiologist, she'll pull out her defibrillator paddles and restart my heart--just so she can kill me again," Nola. –Switch

Gypsy Beaumont used to love being a whirly-twirly girl who picked flowers and danced. She has been dreaming of her savvy—the extraordinary talent that strikes every Beaumont on their thirteenth birthday. Gypsy had imagined getting the wings of angels or being able to catch candy necklaces instead of fish, but when her thirteenth birthday arrives, Gypsy gets blurry vision and catches glimpses of the past and future.

Then in a strange turn of events, everyone’s savvy is switched and things become topsy-turvy. Gypsy must learn to use her new powers and try to stop the events of the last vision she saw. As she tries to change the future, Gypsy embarks on an adventure that will lead to new friendships and closer relationships with her family.

Right from the start, readers will want to turn the page to see what happens next in this entertaining story of adventure and magic. Switch shows the power of friendship and family in a heartwarming story. Being told from Gypsy’s point of view allows the reader to peek inside of her mind and understand her hopes, fears, and uncertainties. Gypsy’s personality comes to life and shows the difficulties of being different; however, the story goes on to show how being different should not be seen as an embarrassment, but as a gift.

Switch tackles several difficult issues including changing friendships and the effects of aging. Gypsy’s self-confidence takes a hit when her best friend stops talking to her because Gypsy acts like a “baby.” The story also focuses on Gypsy’s grandmother who is beginning to have difficulties remembering people and often lives her life in the past. Switch expertly weaves lessons about friendship, family, and accepting yourself into a beautifully written story with memorable characters.

Other books by Ingrid Law

"My mom is going to kill me. Then, because she's a cardiologist, she'll pull out her defibrillator paddles and restart my heart--just so she can kill me again," Nola. –Switch