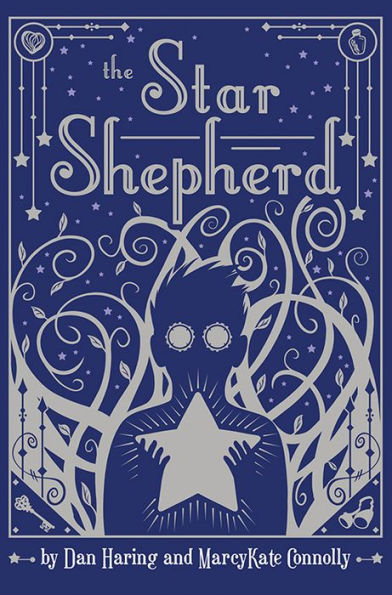 “I thought I could stop the stars from being taken on my own, but I was wrong,” Kyro. –The Star Shepherd

All Kyro wants is to be a Star Shepherd, like his dad, Tirin. Star Shepherds are the heroes that save the stars that fall to the ground. Without them, the stars would fizzle out and die.

Star shepherding is hard enough when Kyro is just trying to impress his dad, but when clusters of stars all begin to fall at once, Kyro realizes something is very wrong. His father goes out to investigate but never comes back. Now, with only his dog, Cypher, and his friend, Andra, Kyro must journey across the land to find out what’s happening to the stars. He may become the Star Shepherd he always dreamed of being, but it won’t be easy.

Focusing on Kyro, the story unfolds from his perspective as he journeys around the land trying to find his father and solve the mystery of the falling stars. Kyro is a likable character who works to overcome the many obstacles in his way. He has many fears, including the fear that he isn’t good enough to be a Star Shepherd, and the fear that his father may be too obsessed with saving stars to love Kyro anymore. However, Kyro not only overcomes these fears but strives to protect even Star Shepherds who don’t help him and those who hate Star Shepherds.

One of the best aspects of the story is Kyro’s relationship with Andra, his only friend. Even though the townspeople do not like Kyro, Andra doesn’t care. She is a steadfast and loyal friend who believes Kyro when no one else does. When Kyro is abandoned by the townspeople and by the other Star Shepherds, Andra takes it upon herself to support Kyro. Without Andra, Kyro might not have found the strength to see his journey through to the end.

Even though the story has some difficult vocabulary, the plot is easy to understand and the writing flows well. Young readers will enjoy watching Kyro journey from place to place through the well-thought-out world, especially as more fantastical parts of the story are revealed. While there are moments of potential violence, the scenes are done tastefully, never going too far. Also, there are illustrations within the book, one at the start of each chapter. These illustrations are in black and white and illustrate the characters and creatures in the novel. These illustrations usually take up half a page, though a few take up entire pages.

Overall, The Star Shepherd is a great read for middle schoolers. The unique setting will engage readers because it includes mythical creatures, ancient robots, and stars. Readers will root for Kyro, who fights for what he believes in and ends up succeeding in the end. Throughout the story, Kyro gains confidence and learns more about himself.  The Star Shepherd is more than an adventure story; it shows the importance of communication, the effects of grief, and the importance of friendship.  With a well-paced story, fun characters, and an interesting plot, The Star Shepherd would be a great book for any middle school reader who love fantasy.

“I thought I could stop the stars from being taken on my own, but I was wrong,” Kyro. –The Star Shepherd