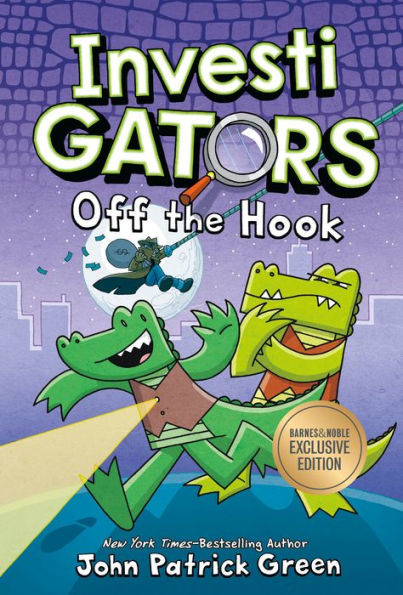 Investigators Mango and Brash are on the hunt for Crackerdile, who has been turned into a bucket of dough. With the help of the plumber who has been combined with a snake, Crackerdile plans to find the perfect secret lair and recruit more villains. But first, Crackerdile must find a way to change forms because “no one’s going to want to join a team led by a soft pile of mush.”

Before Mango and Brash start their investigation, they are given new V.E.S.T.s. However, once outside the science lab, the new V.E.S.T.s cause problems of their own. For instance, Mango and Brash are mistaken for investment bankers and must attend a board meeting, which is a complete bore.

As Brash and Mango are stuck in the meeting, Crackerdile figures out a way to make himself into Waffledile. Then, Waffledile kidnaps a scientist. With the scientist’s help, Waffledile grows to a huge size. But then Waffledile eats Brash. Is there any way to stop Waffledile? And how can Mango free Brash from Waffledile’s stomach?

Off the Hook is a graphic novel that is laugh-out-loud funny. The combination of human and animal characters blends to create a ridiculous story that uses wordplay to add humor. While readers will enjoy all the wordplay, parents might not like the references to butts.

The imaginative story comes alive in brightly colored artwork that shows the characters’ wide range of emotions. The text is large and uses different font sizes, which help emphasize the characters’ emotions and important aspects of the story. Another positive aspect is that the human scientists are a diverse group of characters with a wide range of skin tones. The end of the book shows how to draw Waffledile and includes a few riddles.

The illustrations and the unique storyline of Brash and Mango will appeal to even the most reluctant readers. Each page has 3 to 11 sentences. The sentences range from one word to more complex sentences. The story does an excellent job of giving enough background information so readers who are new to the series will understand the plot. However, for maximum enjoyment, the series should be read in order.

Off the Hook will appeal to even the most reluctant readers because the plot is more silly than serious. Readers may not understand all of the humor regarding investment bankers, but they will still enjoy the silly antics of Brash and Mango. Parents who want their children to read a graphic novel with a more positive message should add the Hilo Series by Judd Winick to their reading list.