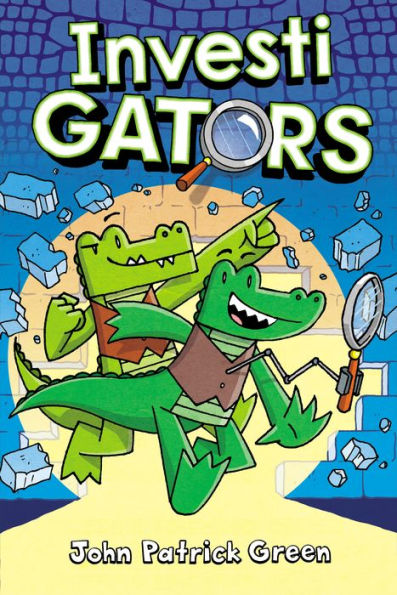 “Good thing there’s nothing suspicious about baking a giant cake for a large, mysterious figure wearing a raincoat on a sunny day,” Mango. – InvestiGators

Alligators Mango and Brash, secret agents for the Special Undercover Investigator Team, have been called into action. It’s up to them to find out what happened to the famous chief, Gustavo Mustachio. The cupcake master disappeared right before his new recipe was revealed! Before the alligators get far in their investigation, an explosion rocks a group of scientists who were about to reveal a new invention. In order to find out if the two events are connected, Mango and Brash rush to the scene. As they dig deeper into the mystery, more questions continue to pop up. Will the two investigators be able to solve the mystery? Can they outsmart the villain?

Readers will laugh their way through InvestiGators, a graphic novel with bright, colorful illustrations. The story’s fast pace takes readers on a winding path through the absurd. Many events are over-the-top, unbelievable, and silly. Mango and Brash often get distracted from their goal of solving Gustavo Mustachio’s disappearance, and they are able to solve several mysteries. However, the story does leave one plot thread unanswered, which will have readers reaching for the next book in the series, InvestiGators Take the Plunge.

The InvestiGators world has alligators, sharks, and other animals working side by side with humans. The world is not only silly, but it makes any absurd thing seem possible. The wordplay, puns, and potty jokes will have readers laughing out loud. The plot is outrageous and has many side stories thrown in. The interesting characters, jokes, and mystery will have readers flipping the pages until the end. The humor in InvestiGators is much like that of Dog Man and Captain Underpants.

Even though the graphic novel will entertain, the winding, wild plot is confusing and at times a little too crazy. In addition, ethnic stereotypes are used for comic effect. Several professions are also stereotyped in a negative way. The stereotypes may cause a giggle in a graphic novel; however, the jokes could be considered offensive. Another flaw of the story is the potty humor. Even though the potty humor is mild, some parents may object to jokes about poop. Lastly, some of the characters talk in slang. For example, when a man apologizes, a scientist says, “S’all right bruh!”

Middle-grade readers will enjoy the silly story; however, parents may want to bypass this book for a story that doesn’t border on the offensive. If you’re looking for a humorous, animal graphic novel, there are a lot of great ones to choose from including the Two Dogs in a Trench Coat series by Julie Falatk, Mac B. Kid Spy series by Mac Barnett, and Klawde by Johnny Marciano & Emily Chenoweth.

“Good thing there’s nothing suspicious about baking a giant cake for a large, mysterious figure wearing a raincoat on a sunny day,” Mango. – InvestiGators