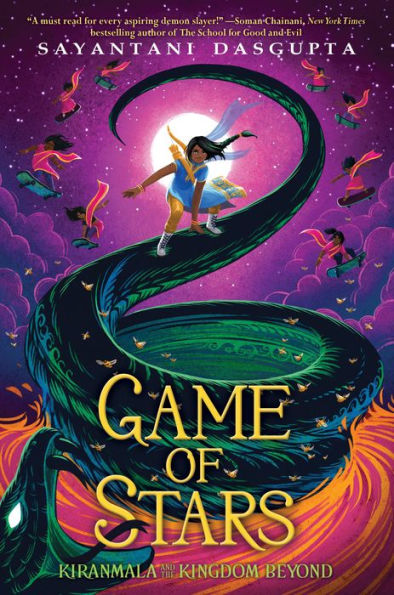 Kiranmala and the Kingdom Beyond #2

Twelve-year-old Kiranmala just wants to be normal, despite having been born an Indian princess in the Kingdom Beyond, an alternate dimension. So, when the Demon Queen shows up in her dreams, Kiranmala doesn’t want to listen to the demoness.

After a visit with some all-seeing birds, Kiranmala finally, reluctantly goes to the Kingdom Beyond and finds that the Kingdom Beyond is in danger. A game show reigns supreme, society is fraying, and everyone is running scared or imprisoned. Kiranmala knows her father is behind the game show, but is there any way she can beat him at his own game?

The second installment of the Kiranmala and the Kingdom Beyond Series, Game of Stars takes readers on an action-packed ride through the Kingdom Beyond. The story brings back some beloved characters from the first book and adds new characters as well. This story will be confusing if readers have not read The Serpent’s Secret first!

The story revolves around the Indian culture and mythology, with many of the creatures straight out of Bengali folktales. For those not familiar with the culture, some of the references to Indian food, clothing, and monsters may be confusing as they lack adequate description. The cute black and white illustrations scattered throughout the story help the readers visualize some characters and events, but there needed to be more of them. Although it is exciting to have an Indian heroine, the story may be frustrating to follow for those unfamiliar with the customs.

A drawback to this book is that none of the characters talk like normal people, and much of the dialogue is childish. Some creatures talk in rhymes and riddles, which is fun. However, the characters continually use name calling throughout the story, which adds to the childish tone. For example, someone calls the Serpent King a “scummy snake” and a “pooper-scooper.” Even the Demon Queen’s and the Serpent King’s dialogue makes them seem more like whiny children rather than strong adults.

As Kiranmala travels through the Kingdom Beyond, she considers the nature of good and evil. Through her experiences, she learns that being human or a rakkosh doesn’t define you; instead, it is how people act that makes them good or evil. Throughout the story, Kiranmala worries that she will become evil like her father. A professor tells her, “No one turns good or evil by magic. That’s not how it works. You become evil when you choose to act against your conscience again and again. Being good or evil is about the decisions you make each and every day. It’s not something that just happens to you.

For those who haven’t picked up the Kiranmala and the Kingdom Beyond Series, you may want to try Aru Shah and The End of Time first because it is less confusing but still revolves around India’s mythology. Middle school readers will enjoy the riddles, the funny characters, and the exciting chases.  Overall, Game of Stars is an action-packed story that shows that a strong, smart girl is capable of heroic deeds and saving the prince.