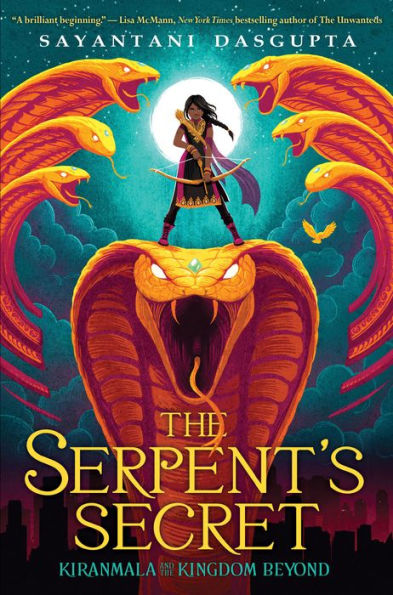 “You can’t just decide to forget who you are because it's inconvenient, Princess. Life doesn’t work like that. It’s messy and complicated and everything’s not always peaches and unicorns,” Neel.  —The Serpent's Secret

Kiranmala and the Kingdom Beyond #1

Kiran’s parents are just a bit odd, and she has never really fit in. Even so, she thought she was just a regular sixth grader living in New Jersey. Then, on her twelfth birthday, her parents disappear and a rakkhosh demon crashes through her house to try to eat her.

When two princes show up, trying to rescue her, she realizes that her parents’ stories are really true—she really is a princess that comes from another world. With the help of the two princes, Kiran is taken to another dominion, one with magic, winged horses, moving maps, and annoying talking birds. Before she can save her parents, she must fight demons, unlock riddles, and avoid the Serpent King of the Underworld.

The Serpent’s Secret is an interesting and action-packed retelling of Indian mythology. Filled with riddles, jokes, and a talking bird, the story will entertain middle school readers. Black and white illustrations will help readers visualize the characters. As Kiran learns about her cultural background, she also learns to accept herself. Although there is violence, the scenes are appropriate for younger readers because they are not described in detail and much of the action is running away from demons instead of battling them.

Kiran and the two princes talk like stereotypical teenagers. The main character’s dialogue is filled with slang and idioms such as when Kiran looks at the prince and thinks, “While I got my fill of Lal-flavored eye candy.” There is a lot of creative name-calling throughout the story, which does not involve cursing.

A dynamic story with a strong heroine, The Serpent’s Secret will delight those who like a good adventure story.  For readers interested in adventure stories or India’s mythology, Aru Shah and the End of Time is a must-read.

“You can’t just decide to forget who you are because it's inconvenient, Princess. Life doesn’t work like that. It’s messy and complicated and everything’s not always peaches and unicorns,” Neel.  —The Serpent's Secret