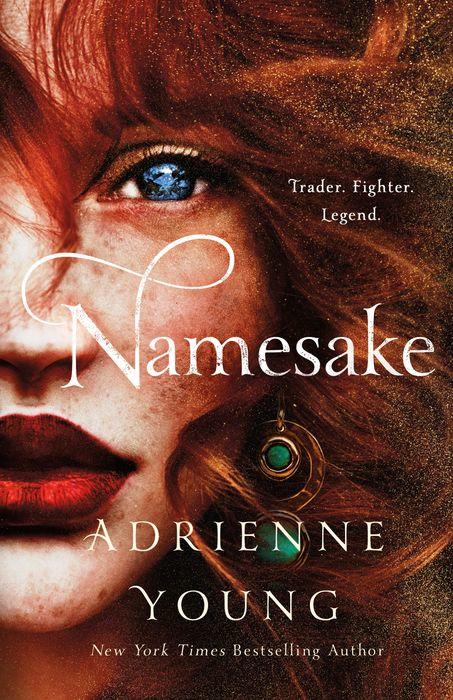 “I didn't leave you on Jeval because I don’t love you. . . I left you there because I have never loved anything in my life like I love you,” Saint. – Namesake

The second installment of the Fable duology, Namesake, picks up right where the first left off, at the kidnapping of Fable. Fable was taken from her crew onboard the Marigold to become a prisoner of the infamous pirate, Zola. However, Zola doesn’t just want Fable to sit around—she must become part of his crew too. Eventually, Fable finds out Zola’s motive behind forcing her to work for him: he needs her to dredge enough ore to impress Holland, the woman who controls the gem trade in the Narrows.

When Zola’s ship arrives in Bastion, Holland’s home port, Fable quickly discovers there is more to the story. Holland isn’t just a gem trader, she’s also Fable’s grandmother. While Zola wants to get into Holland’s good graces by reuniting Holland with her granddaughter, Holland still bears ill will against Zola since he helped Fable’s mother run away in her youth. Holland expects Fable to follow the path her mother did not, but Fable doesn’t want to be a pawn in anyone’s game. She has her own plans: free the Marigold from her father, Saint’s, control, and reunite with her lover, West.

Things become even more complicated when West shows up at Holland’s house, desperate to bargain for Fable’s freedom. Holland agrees—on the condition that the pair work together to take down Saint. While Fable’s relationship with her father is less than stellar, she still finds it difficult to work against him, even when her life is on the line. However, even though Fable is tested, she always tries her hardest to protect those she cares about.

Fable’s relationship with her family is at the forefront of this book. During her time doing Holland’s bidding, she learns more about her mother, including that she gave up a life of finery for the sea. Fable further develops her skills as a gem sage too, which also brings her closer to her mother. In terms of her father, the story ends with Saint finally claiming Fable as his daughter, which shows how far he and Fable have come. Fable says, by claiming her “he was handing over the sharpest blade to whoever might use it against him.” By being willing to claim each other as family, they create a vulnerability, but it’s a worthy sacrifice because of how much they care for one another. The happily-ever-after ending is somewhat unrealistic for the harsh world the story is set in, but the clichés are a tidy wrap-up to the events and conflicts opened by the first novel.

The story, overall, is more focused on adventure and enjoyment than presenting a lesson to readers. The plot twists and impulsive nature of the characters leave readers wondering what their next moves will be. The violence and sexual content in the story are not overly graphic, yet the Fable books may upset some readers because the characters struggle with the trauma of death, murder, abandonment, and other heavy topics. Namesake emphasizes our bonds to others as something worth protecting, even if they make us vulnerable. Love is worth the pain. In the end, as Fable walks at her father’s side, she says, “For the first time in my life I wasn’t hiding, and neither was he.”

“I didn't leave you on Jeval because I don’t love you. . . I left you there because I have never loved anything in my life like I love you,” Saint. – Namesake