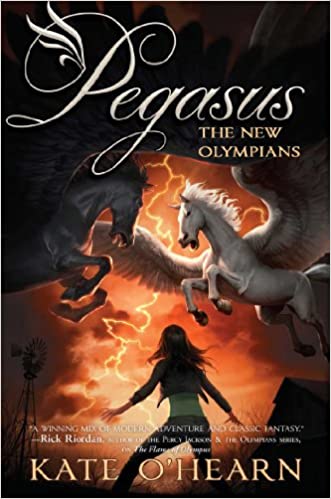 “Jupiter cannot be reasoned with when the sin is too great. If your people have created New Olympians, nothing will stop him. He can and will destroy this world,” Alexis. –The New Olympians

There is a horse named Tornado Warning that’s winning every race he enters—and faster than ever before seen—and Emily thinks the animal looks a lot like Pegasus. Afraid of what this might mean and of what Jupiter might do if he finds out, Emily, Joel, Paelen, Pegasus, and the sphinx Alexis decide to go to Earth to investigate. There they discover a plot to replicate Olympians and Nirads. The CRU has already created dozens of clones. Now they want to create their own Emily clone—and it doesn’t matter to them if the original Emily dies in the process.

Can Emily and her friends put a stop to the CRU’s plans before Jupiter finds out and follows through on his threat to destroy the Earth?

The New Olympians’ plot revolves around the CRU’s ability to make clones of the Olympians. The Olympians believe making clones is unnatural and that the humans must be stopped. Emily’s thoughts, the descriptions of the clones, and the Olympian’s views all reinforce the idea that making clones is immoral. To make matters worse, the CRU hopes to use the clones to dominate the world. An agent explains, “One world order isn’t a bad thing, Emily. There will be no more borders, no more wars . . . One language, one people and one country. . . The CRU is going to create Olympus on Earth.” In order to achieve this, the CRU will murder anyone who opposes them. While Emily has no desire to hurt anyone, she has no choice but to destroy the CRU facility and anyone who tries to stop her.

The New Olympians has a more serious tone and ramps up the violence. Sensitive readers may be upset by the treatment of the clones, some of which have deformities and are kept in cages. While none of the actual deaths are described, the number of people who are injured, killed, and punished may be upsetting.

One negative aspect of the story is inconsistencies in the characters’ actions. For example, even though the CRU can identify Paelen, he still puts himself and others in danger when he goes to the Las Vegas strip to see the sights. In the first two books, Paelen tries desperately to prove that he is no longer a thief. However, in The New Olympians, he steals several times and acts as if he enjoys the thrill of thievery. In another instance, Emily and her friends’ original goal was to verify that the CRU had indeed made clones. However, instead of reporting back to Jupiter once they’ve confirmed the existence of clones, the group decides to confront the CRU. Despite their knowledge of the CRU’s cruel tactics, the group makes several unrealistic decisions. For example, Agent T, who used to work for CRU, leads the group to a small town close to Area 51. Even though he knows the area is crawling with agents, Agent T thinks the group will go unnoticed. However, Agent T is quickly dispatched. Agent T’s presence doesn’t shed light on any new information which makes that section of the story feel unimportant and a waste of pages.

Readers who have read the first two books in the series will find The New Olympians frustrating because of the story’s inconsistencies, Emily’s lack of character growth, and events that do not advance the plot. However, readers may enjoy the reappearance of several characters from the previous books. The New Olympians wraps up the main conflict with the CRU’s clone-making abilities, which allows the next book in the series, Pegasus and the Origins of Olympus, to take Emily back in time to the origins of Olympus and to the deadly battle between the Olympians and the Titans. Readers who love traveling to other worlds where pegasi live should also read the Riders of the Realm Series by Jennifer Lynn Alvarez.

“Jupiter cannot be reasoned with when the sin is too great. If your people have created New Olympians, nothing will stop him. He can and will destroy this world,” Alexis. –The New Olympians