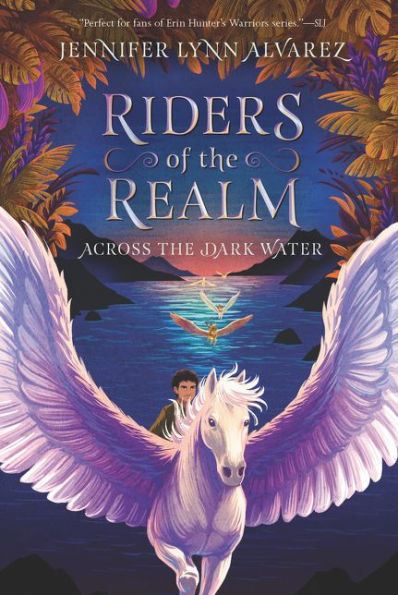 “What is fair to one is not fair to another. Fairness is a sentiment that will sprout bitterness in your heart,” Darthan. –Across the Dark Waters

Across the Dark Water

Riders of the Realm #1

Twelve-year-old Rahkki is a stable groom for the Riders in the Sandwen army, who must battle deadly spit dragons and hordes of warring giants. The Sandwens believe they have tamed all the wild pegasi in the lush jungles of the Realm and turned them into flying warhorses. But when a herd of wild steeds flies over their village, Rahkki and his clan mates are stunned.

Meanwhile, a small herd of pegasi has journeyed across a treacherous ocean to settle in a new and free land. Led by Echofrost and Hazelwind, the Storm Herd steeds are unaware of the Sandwen clan. But when the unthinkable happens, Echofrost and the rest of Storm Herd will have to come to trust the Sandwens, or both may not survive.

Pegasi, giants, fire-breathing lizards, and landwalkers come together in an exciting story full of suspense. Echofrost desires to be free and she has vowed that no pegasi will be held captive. When her friend Shysong is captured, Echofrost sacrifices her freedom in the hope that she will be able to help Shysong escape. But escaping the Landwalkers is more difficult than Echofrost could have imagined. She fights every Landwalker who comes near her. When a young boy tries to help Echofrost, Echofrost begins to understand that some Landwalkers can be trusted.

Across the Dark Waters uses Echofrost’s voice to highlight the pegasi’s plight and their desire for freedom, while Rahkki’s voice brings the landwalker’s complicated political system to life. The beginning of the story may confuse readers because of the many names and the detailed descriptions that are necessary to build the realm’s world. However, it does not take long until both Echofrost and Shysong are captured and the non-stop action begins. Readers will empathize with Echofrost as she tries to escape captivity, and they will also root for Rahkki as he fights to help the wild pegasi.

Although the publisher recommends Across the Dark Waters for readers as young as eight, younger readers may have a difficult time with the complex story that contains many references to the past in both the pegasi and the landwalker’s lands. The advanced vocabulary and sentence structure may also be difficult for younger readers. In her fight for freedom, Echofrost is treated brutally and, although the descriptions are not gory, there is blood and violence that may upset sensitive readers.

As the first installment of the Riders of the Realm series, Across the Dark Waters will be impossible for readers to put down. With battles, political intrigue, plot twist, and an unlikely friendship, Across the Dark Waters is a beautifully written, complex story that is engaging and exciting. The surprising conclusion will leave readers reaching for the next book in the series, Through the Untamed Sky. Readers who love horse stories will also want to read The Rose Legacy by Jessica Day George.

“What is fair to one is not fair to another. Fairness is a sentiment that will sprout bitterness in your heart,” Darthan. –Across the Dark Waters