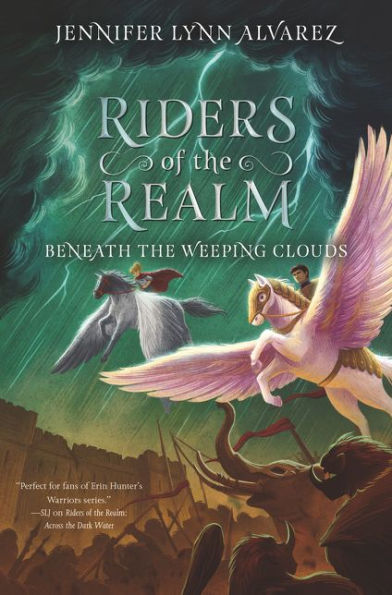 “Never dispute your own legend,” Brauk Stormrunner. –Beneath the Weeping Clouds

Beneath the Weeping Clouds

Riders of the Realm #3

Echofrost, Shysong, and all of the Storm Herd are finally free, but their freedom came with a price. Sandwen Rider Rahkki Stormrunner has been captured by the Gorlan giants, who are quickly losing their patience with the Fifth Clan. With Rahkki in grave danger, the Storm Herd must join forces with the humans they have long feared to save him.

As sweeping monsoon rains threaten to ravage the region, enemies, friends, tame steeds, and wild steeds will have to engage in one final battle to decide the fate of all three groups—the Sandwens, the giants, and the pegasi.

The third installment of the Riders of the Realm Series focuses more on Rahkki’s experiences in the giant’s world. Even though Rahkki isn’t free to leave, the giants treat him as a welcomed guest. The giants hope to make a peace agreement with the landwalkers. Soon Rahkki realizes that many of his ideas about the giants are incorrect. In the end, Rahkki’s misconceptions prevail and end up destroying a chance at peace.

I’Lenna and Rahkki’s brother, Brauk, also plays a dominant role in the story. Unfortunately, a large part of the story focuses on Rahkki, Brauk, and I’Lenna attempting to find each other. Even though the publisher recommends the series for readers as young as eight, younger readers may be frightened by some of the story’s events. At one point, Rahkki is almost killed by giant ants and a giant spider. Another frightening event is when I’Lenna’s mother has her tied up as a sacrifice to a giant lizard.

Alvarez expertly weaves the important events from the past books into Beneath the Weeping Clouds, which will help readers keep track of the large cast of characters. Readers who have read the previous books will emotionally connect to the characters, especially Rahkki. Readers will root for Rahkki as he tries to bring peace to his world. The events of the conclusion are exciting and show the importance of not making assumptions about others. However, the conclusion also leaves many unanswered questions.

Beneath the Weeping Clouds is full of danger, adventure, and even ends with an epic battle between Rahkki’s family and the Queen’s supporters. The story reinforces the importance of communication and forgiveness. The Riders of the Realm Series will entertain readers. However, the long descriptions, the large cast of characters, and the complex storyline make the story suitable for strong readers. Beneath the Weeping Clouds explores the themes of friendship, freedom, and forgiveness and will leave readers wishing that they could bring Rahkki into their world.

“Never dispute your own legend,” Brauk Stormrunner. –Beneath the Weeping Clouds