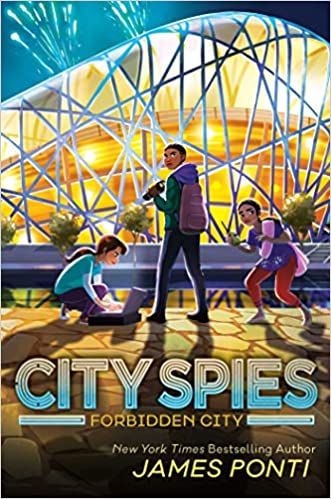 “Anyone can hide under darkness of night, but the cunning one hides out in plain sight,” Tru. –Forbidden City

Street-smart and agile, Paris is a huge fan of Liverpool F.C., Doctor Who, and chess. He’s also a survival specialist and the oldest member of the City Spies—a secret team of young agents working for M16, the British Secret Intelligence Service.

When M16 sets out to thwart Umbra’s attempts to recruit a prominent North Korean nuclear physicist for their nefarious purposes, the operation calls for Paris to make a covert connection with the scientist’s chess-prodigy son at a pair of tournaments in Moscow and Beijing. Meanwhile, Sydney is embedded as a junior reporter for a teen lifestyle site as she follows the daughter of a British billionaire on tour with the biggest act of her father’s music label.

The band and the billionaire are somehow connected to the scientist and the recent thefts of nuclear material from an old Soviet missile base, and it’s up to the City Spies to figure out how. The stakes couldn’t be higher, and the team will have to work together in perfect harmony in order to succeed on their most dangerous mission yet.

The third installment of the City Spies Series takes its focus off Brooklyn, and instead, Paris takes center stage. On the current mission, Paris and Mother go undercover. As part of their cover, Paris participates in the Around the World Chess Tournament, which allows Paris’s personality to shine. This also allows Mother to show that he truly wants to be a good father to his adopted children. The new dynamic adds interest and allows the story to focus on the common question: “Who am I?” This question gives Mother the perfect opening to share some of his background which gives the story a more sentimental vibe.

While Paris wrestles with the question, who am I, he also makes a decision that he thinks was a huge mistake. These two story threads dovetail perfectly and highlight the fact that everyone makes mistakes, and while some mistakes have devastating consequences, mistakes should be forgiven. In addition, when it comes to mistakes and consequences, we should not “celebrate people’s misfortunes.”

The mission requires part of the City Spies team to travel to both Russia and China which adds adventure and action. However, the team splits up into three groups and the constant back and forth between groups is at times a little overwhelming. Plus, readers who fell in love with Brooklyn will be disappointed by her absence because she sits out most of the mission.

The City Spies Series doesn’t rely on one plot formula, but instead, each book has a new focus that keeps the story interesting. Despite this, for maximum enjoyment, the series should be read in order. While the team must work together to complete the mission, their relationships—like any family’s—are complicated and have conflicts. These conflicts make the characters more relatable and add an interesting dynamic to the spy story. While the City Spies Series will appeal to readers of all ages, the series is perfect for middle-grade readers who love spy mysteries but want to avoid the violence. The Friday Barnes Mysteries Series has a more humorous tone, but will also appeal to middle-grade readers who love mysteries.

“Anyone can hide under darkness of night, but the cunning one hides out in plain sight,” Tru. –Forbidden City