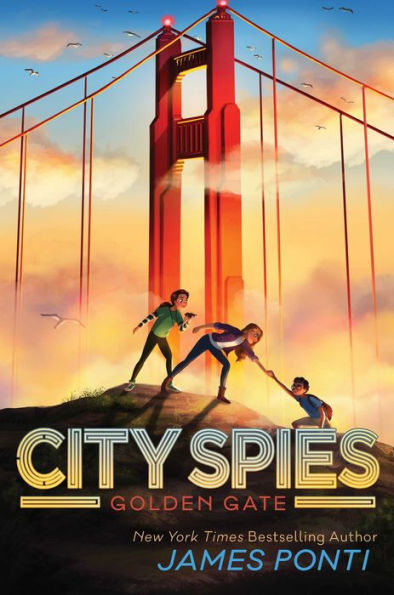 Fourteen-year-old Sydney is a surfer and a rebel from Bondi Beach, Australia. She’s also a field ops specialist and frequent mission leader for the City Spies—a secret team of young agents who work for MI6, the British Secret Intelligence Service.

After thwarting a notorious villain at an eco-summit in Paris, the City Spies gear up for their next mission. Operating out of a base in Scotland, this secret team of young agents have honed their unique skills, such as sleight of hand, breaking and entering, observation, and explosives. These skills allow them to go places in the world of espionage where adults can’t.

Sydney is excited to learn that she’ll be going undercover on the marine research vessel, the Sylvia Earle. But things don’t go exactly as planned, and while Sydney does find herself in the spotlight, it’s not in the way she was hoping.

Meanwhile, there’s been some new intel regarding a potential mole within the organization, offering the spies a lead that takes them to San Francisco, California. But as they investigate a spy who died at the Botanical Gardens, they discover that they are also being investigated.

Similar to the Charlie Thorne Series, City Spies Golden Gate takes readers on a fast-paced, multi-country mission in a fight between good versus evil. The second installment of the City Spies Series focuses on solving several mysteries, including finding the person who killed a spy. Even though there is less action, the story is immensely interesting because it contains mystery, high-risk undercover work, and gives readers a peek into the inner turmoil of an adolescent spy. Even though all the City Spies have an amazing skill, they make mistakes and have moments of insecurity. Because the characters are multifaceted and imperfect, they are both likable and relatable.

During the City Spies’ mission, Mother is absent. Even though the loveable character is missed, this allows Monty to take a more active role in the mission, which leads to several surprises. Even though much of the story is intense, there are still moments of humor and heart. Plus, readers will get a look inside several of San Francisco’s landmarks, including Muir Woods, Alcatraz, and Fort Point.

The complicated plot, the evil villains, and the advanced vocabulary will be difficult for younger readers. However, the City Spies Series will appeal to a vast number of readers because it contains action, adventure, intrigue, and mystery. Readers ready for more mature mysteries will love the City Spies Series. Mystery-loving fans who want to learn some gangster lore will also enjoy Notorious by Gordon Korman.